Postal reform due in new year 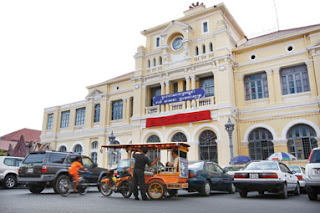 A tuk tuk driver waits outside Phnom Penh’s central post office yesterday. The service is set to be run by a new state-owned firm from next month. Photo by: Wesley Monts
via CAAI
Friday, 24 December 2010 15:01 Chun Sophal
CAMBODIA’S postal system is set to become a public enterprise on New Year’s Day, with assets and investment worth up to US$17 million.
Minister of Posts and Telecommunication So Khun said yesterday that the government would invest $3.7 million of cash capital to the new agency, in addition to the transfer of $13.3 million worth of assets – such as the land and buildings associated with the services’ 88 existing branches.
According to So Khun, whose ministry currently runs the service, the government currently garners more than $5 million a year through mailing and shipping packed goods.
He declined to speculate on the earning potential of the new state-run enterprise, which has been previously tipped by officials as being set to list on Cambodia’s new stock exchange, due to launch next year.
“We cannot estimate how much this new agency will earn, we have to wait and see its initial three-month transactions,” he said.
Staff changes
Currently, the postal service employs around 700 staff.
Under the new scheme, the Minister said that number could be cut to 432 – with the remaining employees retained by the Ministry of Posts and Telecommunications (MPTC).
But despite the pull back in staffing, commentators said that the newly structured service could improve quality.
Chan Sophal, president of Cambodia Economic Association, said that, in general, such institutions had increased flexibility.
They also had potential to generate more income, because such companies could increase salaries to motivate employees.
“I think this trend is really good because it is easy to generate more income and serve public interest,” said Chan Sophal.
When the scheme first came to light in July, government representatives said the move would improve the service’s financial responsibility and transparency, while allowing increased autonomy within the telecommunications and information technology sector – also regulated by MPTC.
The new board of the new organisation, according to previous reports, is set to be composed of representatives from MPTC, the Ministry of Finance, the Council of Ministers, a government-appointed CEO, and a staff representative.
The new CEO is believed to be the director of postal services in Banteay Meanchey province.
Council of Ministers spokesman Phay Siphan could not be reached for comment.
The government has said that at least three state-run enterprises are set to list on Cambodia’s first bourse.
Phnom Penh Water Supply Authority, and Telecom Cambodia have been named as two of the companies concerned. Last month, officials said the third company was subject to a further announcement, despite initial reports it would be Sihanoukville Autonomous Port.
Posted by CAAI News Media at 10:18 pm

I just want to say Hi to Everyone!