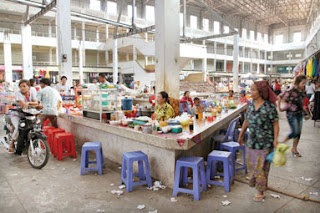 Vendors sell food at PC Market in Meanchey district in Phnom Penh yesterday. Photo by: Sovan Philong
via CAAI
Friday, 24 December 2010 15:01 Mom Kunthear
REPRESENTATIVES of more than 300 vendors protesting outside PC Market in Meanchey district said yesterday that they would petition the chief of Boeung Tompun commune to intervene after the market operator proposed raising stall rental fees.
One representative said stall holders had begun protesting after hearing about a proposed rental increase on Wednesday.
“They increased the new cost from US$130 to $160 for the big shops that are three metres by six metres, and increased from $85 to $110 for the small shops,” said the representative, who spoke on condition of anonymity claiming that vendors had been warned against speaking to the media.
She said the increases were unaffordable and that vendors would take the protest to district and municipal officials if the commune chief did not intervene on their behalf.
“At the end of the protest, we will all come for help from Prime Minister Hun Sen, who is [the] only person that we consider as our parent,” she said. “I do believe that Prime Minister Hun Sen will not let us die and will help us.”
Another representative, who also asked not to be named citing fears for her safety, said the proposed rental increases were the latest in a series of annual price hikes.
“We don’t have the ability to pay the renting costs that the market owner always raises,” she said.
Heng Vuthy, manager of PC Market, said yesterday that vendors who weren’t happy with the rent increase were free to leave.
“We don’t force them to rent, they can stay if they want and they can leave if they don’t want to rent,” he said.
Commune Chief Sous Sarin could not be reached for comment yesterday.
Posted by CAAI News Media at 10:29 pm