Union head to appeal to PM 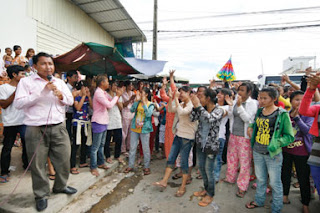 Photo by: Heng Chivoan
Ath Thorn, head of the Cambodian Labour Confederation, speaks to garment factory workers during a strike demanding an increase in the minimum wage in September.
via CAAI
Thursday, 27 January 2011 15:02 Mom Kunthear
Cambodian Labour Confederation president Ath Thorn has announced plans to appeal to Prime Minister Hun Sen in a bid to allow more than 300 workers dismissed or suspended in connection with September strikes in the garment sector to return to their jobs.
Last month, Ath Thorn sent a letter to the Ministry of Labour on behalf of 379 garment workers from 18 factories who he said were dismissed or suspended following court complaints filed by factories after the strikes. The workers were protesting against a US$5 rise in the industry-wide minimum wage that brought the monthly minimum to $61, a total they said was inadequate.
“I did not get any reply from the Labour Ministry regarding our request for intervention, and we think the ministry must not be working at all because they have not even acknowledged our letter,” Ath Thorn said.
“We will write a letter and send it to the Prime Minister this week on behalf of the workers who were fired because we have no hope of getting a result from the Ministry of Labour.”
Ken Loo, secretary general of the Garment Manufacturers Association in Cambodia, said he believed Ath Thorn’s figures on dismissals and suspensions were inflated, though he said he did not have figures of his own available. “The suspended have all but been reinstated, and we are really only talking about a few that have outstanding court cases,” Loo said. “The factories are just proceeding, going through the legal process.”
Oum Mean, a secretary of state at the Ministry of Labour, said yesterday that he had not addressed the issue because of an extended leave of absence from his job due to health problems. Labour Ministry Director General Seng Sakada could not be reached for comment.
In a speech in September, Hun Sen called on factories to drop complaints filed against workers and union representatives in connection with the strikes and to allow suspended or dismissed workers to return to their jobs.
International clothing brands including Levi’s, Gap and Adidas issued a joint statement at the time expressing “great concern” and calling for a negotiated solution to the unrest.
“We want the government to find out the reason why the factories have not respected the orders of the Prime Minister, the courts and the Council of Ministers,” Ath Thorn said. Union leaders, he added, had collected over $12,000 to support the dismissed workers.
In October, GMAC said factories would drop all complaints related to the strikes in exchange for apologies from workers and unions. Union representatives rejected this offer, claiming the strikes were legal and that they had nothing to apologise for.
ADDITIONAL REPORTING BY JAMES O’TOOLE
Posted by CAAI News Media at 11:01 pm