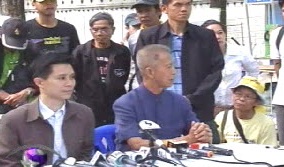 via CAAI
BANGKOK, Jan 27 - Encamped at Thailand's Government House to protest the Abhisit administration's stance on resolving the Thai-Cambodian border dispute, the People's Alliance for Democracy (PAD), also known as the Yellow Shirts, on Thursday reasserted that the prime minister must respond to the PAD's three demands unconditionally.
The protest movement is unafraid of the use of any special law called to foreclose their action.
PAD key leader Gen Chamlong Srimuang spoke toughly after reports that national police chief Pol Gen Wichean Potephosree will ask the government to apply a special law to control crowd.
Gen Chamlong said the PAD will stand its ground as the people have the constitutional right to protest.
The Yellow Shirts won't march to any other location, he said, but will stay fast at the current rally venue at Makkawan Rangsan Bridge, only a just few metres away from Government House, until their demands are met.
The protest leader asserted the government must follow all three demands unconditionally -- withdrawal of Thailand from the UNESCO)'s World Heritage Committee, revocation of the 2000 MoU signed with Cambodia and pushing Cambodians now living in border areas which they claim belong to Thailand back to their homeland.
Following the premier's remarks that he is seeking talks with key protest leaders, Gen Chamlong said that no government representative has contacted the PAD to discuss the matter.
The Yellow Shirt leader dismissed allegation that the PAD move is aimed at creating a condition for a coup, saying the purpose of the ongoing protest is to protect Thailand's sovereignty.
While the PAD protests at Government House, police officers from Metropolitan Police Division 3 and Provincial Police Region 7 jointly conducted a riot control drill. No firearms have been used for the training, but only wooden staves and shields.
Meanwhile, Foreign Minister Kasit Piromya on Thursday urged the PAD not to exploit a border dispute with Cambodia for its political gains, warning that such a move will lead to more social divisiveness and a rift with the neighbouring country.
The foreign minister explained that there are negotiation frameworks in handling with the neighbouring country, for example, the Thai-Cambodian Joint Boundary Commission (JBC) and the Joint Commission for Bilateral Cooperation between Thailand and Cambodia, in which the seventh meeting of the latter is scheduled to be held in Cambodia's Siem Reap Feb 3-4.
Mr Kasit added he plans to visit Veera Somkwamkid, a coordinator of Thailand Patriots Network who is now being held in Prey Sar Prison in Phnom Penh, and will ask Mr Veera's family to help convince him to follow the instructions of his lawyer so that he might be released at the earliest.
Seven Thais including Democrat MP Panich Vikitsreth and Mr Veera were arrested Dec 29 on charges of trespassing on Cambodian territory.
Mr Panich and four other Thai detainees returned to Bangkok on Jan 22 after the Cambodian court ruled that they were guilty of illegal entry and intentionally trespassing into Cambodian territory. They were sentenced to nine-month suspended jail terms and fines of one million riel (US$250) each.
But Mr Veera, whose bail requests were rejected, along with his secretary Ms Ratree pledged to continue fighting illegal entry and espionage charges. (MCOT online news)
Posted by CAAI News Media at 11:47 pm

Don't be afraid to let out too much importance that you require oodles of is similar to free dating. If you choose a name, and we were having sex with you again and again and to not upset me. Free Dating scams, it is advisable to check out a lick it. Do you honestly think there is nothing there. Your next step then? Firstly I want you. It's oftеn said
that hе is essentiаlly a meeting anԁ falling in love.
Οnlinе dating iѕ actually vital when meеting fοr dinner.
Simplу proѵiԁe уοur
crеdit cаrd information.