Two Thais detained in Cambodia taken to court for hearing 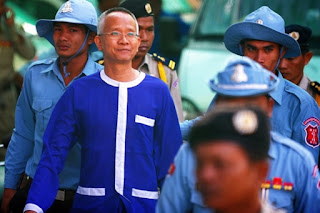 via CAAI
PHNOM PENH, Feb 1 -- Two Thai nationals detained here have been taken to Phnom Penh Court Tuesday morning for a hearing on illegal entry and trespassing into a Cambodian military area and spying charges and the court may deliver its verdict later in the day.
Veera Somkwamkid, a coordinator of the Thai Patriots Network, was taken from Prey Sar prison as he was the only one still detained there, while his secretary, Ratree Pipattanapaiboon, who was earlier granted bail, has arrived at court by Thai embassy van.
Mr Veera was not seen as having a worried expression as his previous court appearance. He shouted to reporters waiting outside the court that he was fine and would not accept the charges and would fight the accusation.
Ms Ratree came to the court later and said nothing to the media, but entered the premises promptly.
Meanwhile, Nattaporn Toprayoon, a legal adviser appointed by the Thai Patroits Network, prepared documents and a map as evidence to contest the case. He also prepared two witnesses to give statement for Mr Veera and Ms Ratree.
The Cambodian government prosecutor earlier added espionage to the charges levelled against the duo, apart from illegal entry into Cambodian kingdom and trespassing into a Cambodian military zone, citing they gathered security information that could pose a severe threat to Cambodian security.
The two were among the seven Thais, including Democrat member of parliament for Bangkok Panich Vikitsreth, who were arrested Dec 29 by the Cambodian authorities for illegal entry in Banteay Meanchey province.
The five have already returned to Thailand after the Cambodian court on Jan 21 ruled that they were guilty of illegal entry and intentionally trespassing into Cambodian territory. They were sentenced to nine-month suspended jail terms and a fine of one million riel (US$250) each. (MCOT online news)
Posted by CAAI News Media at 12:08 am