via CAAI
PHNOM PENH, 17 March 2011 (IRIN) - Investigations by NGOs in Cambodia have found that companies are recruiting girls as young as 13 to work in Malaysian households, confining them in overcrowded and unhygienic “training centres”, forging birth certificates to raise their age, and paying finders’ fees to brokers. 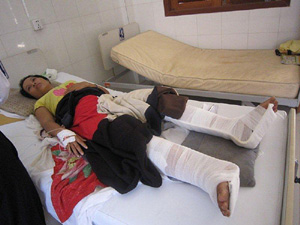 Photo: CLEC
A razor wire tripped Heng Hak's escape attempt from a rogue domestic workers training centre in Phnom Penh
Hou Vuthy, a deputy director-general at the Ministry of Labour, said the government is moving swiftly to address the abuses and that “vast improvements” have been made.
He estimated it would take about three more years to fully control the recruiting companies, some of whom employed unscrupulous agents who “cheated” illiterate village residents. He stressed, however, that the government had already managed to eliminate the illegal recruiters.
Attention has focused on the burgeoning industry, and the firm T&P Co. Ltd. in particular, since one woman died at its “training” facility in suburban Phnom Penh and another broke bones in both of her legs while trying to escape from its third floor balcony.
She got entangled in the razor wire around the second floor, and then fell to the pavement, neighbours said. The three people who carried her off the street and comforted her while awaiting an ambulance were later summonsed to the local police station and interrogated by officers who accused them of colluding with the “trainees” to help them escape, neighbours said.
Tola Moeun, head of the Labour Programme at the Community Legal Education Centre, said the Ministry of Labour and the Department of Anti-Human Trafficking and Juvenile Protection were more concerned with protecting the recruitment agencies than the welfare of the more than 20,000 Cambodians who had been recruited to work as domestic workers in Malaysia.
He said that in most cases he had investigated, the women were under 21, and many were under 18. He alleged that officials at the commune level were falsifying birth certificates so that passports with false dates of birth could be issued by the Ministry of Foreign Affairs.
The Labour Ministry’s Vuthy admitted this had been happening, saying his office had no control over local officials and that it could not verify the authenticity of birth certificates that were delivered by the recruiting companies. He said, however, that the Ministry of Interior had cracked down on village and commune officials who forged documents. “That does not happen any more,” he said.
Government complicity?
MP and former minister for women’s affairs Mu Sochua has accused the government of complicity in trafficking.
“The Cambodian government has effectively legalized human trafficking,” Mu Sochua said. She also said the government was protecting the recruiting companies because some of its members might have financial interests in them.
Local media have reported more than 90 recruiting companies registered with the government, but Vuthy said there were 33, though they operate about 100 “training centres” in and around Phnom Penh. When asked if any companies were connected to the government, he replied: “It is legal in Cambodia for wives of politicians to run businesses,” but added, ownership is irrelevant because all companies must abide by the law.
Mu Sochua said some of companies brazenly violate the law. “The girls are being bought, documents are being forged; they are being imprisoned and abused in Cambodia, and then they are sent into an environment where there are no safeguards to protect them. Often their passports are confiscated and they are confined in households.”
The Cambodia Human Rights and Development Association (Adhoc) warned in September 2010 that its investigation found severe cases of abuse at “training centres” in Phnom Penh and in Malaysia. Passports were being confiscated, domestic workers were forcibly detained, and some were beaten, raped and tortured, Adhoc said.
Lobbying for legal age reduction
“This is probably just the tip of the iceberg,” said deputy director of the Asia division of Human Rights Watch, Phil Roberston. “There is also an overland route for smuggling Cambodian girls into Malaysia through Thailand.”
He also warned that efforts to lobby the Malaysian government to lower the legal age of domestic workers from 21 to 18 were a “recipe for disaster”. “Our research has found that the younger the maid the more vulnerable they are to abuse and exploitation,” he said.
Vuthy said reports in Malaysian media that the Cambodian government was lobbying for a reduction in the age were fabricated by recruiting companies attempting to pressure Kuala Lumpur. Neither the Cambodian government nor the Malaysian government would give into their pressure, he said.
Recruitment companies in Malaysia set their sights on Cambodia in 2009 after Indonesia announced a freeze on sending new domestic workers to Malaysia, following reports of extreme abuse there.
Cambodian workers are more vulnerable because of the language barrier, greater cultural differences, the extreme poverty many came from, and the distance between the two countries, Robertson said.
Roberston said efforts by the international community to train Cambodian officials about trafficking had had little success. “Some top level officials go to seminar after seminar, while lower level officials receive little or no information on what trafficking is and how to prevent it. There is also a bigger problem of corruption among government officials, which is what we are seeing in relation to these labour recruitment schemes seeking to send maids to Malaysia.”
Vuthy sees things differently. He said his ministry was struggling with a surge in demand and a lack of experience and resources to monitor the industry. It was only last year that it produced its first orientation manual for migrant workers, he said.
“We’re learning quickly,” he said.
Posted by CAAI News Media at 7:19 am