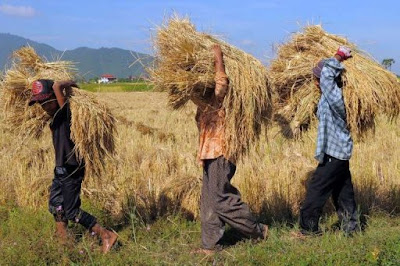 Cambodian farmers carry rice in a field in Kampong Speu province, south of Phnom Penh in 2010

via CAAI
PHNOM PENH — Cambodian and US officials held talks on Thursday to explore ways of settling a decades-old "dirty debt" of more than $400 million, both sides said.
The low-interest loans from the US were given to the government of General Lon Nol after it came to power in a US-backed coup in 1970.
Cambodia says the money helped pay for a devastating bombing campaign on the country by US forces targeting Khmer Rouge guerrillas in the early 1970s.
Prime Minister Hun Sen last year called for the "dirty debt" to be cancelled, but the government softened its stance after US Secretary of State Hillary Clinton said in November that Washington was willing to discuss alternative ways for Cambodia to repay the sum.
A Phnom Penh meeting between US Deputy Assistant Secretary for East Asian and Pacific Affairs Joseph Yun and Cambodian Foreign Minister Hor Namhong was the first step in that direction, the US embassy said in a statement.
During the talks, Hor Namhong asked the US to lower the interest rate on the loans from three percent to one, foreign ministry spokesman Koy Kuong said.
Phnom Penh also requested that 70 percent of the debt be converted into development assistance for Cambodia, he said, without giving further details.
The remainder of the amount would be paid to Washington, he added.
"Our real wish is that... we want it to be cancelled. (But) we have to find common ground that we all can agree on. We cannot resolve it if we stick to a point that they do not agree with," Koy Kuong said.
Yun did not talk to reporters after the meeting but the US embassy said the US hopes "an agreement can be reached soon".
"Such an agreement would enhance Cambodia's creditworthiness and ability to access international capital markets," the statement said.
By the end of 2009, Cambodia's debt to the US totalled approximately $445 million, it added.
Washington was the main financial and military supporter of Lon Nol's regime until it was toppled by the Khmer Rouge movement in April 1975.
Officially, the loans were to develop the country's agriculture sector and boost commodities exports.
Posted by CAAI News Media at 7:36 am