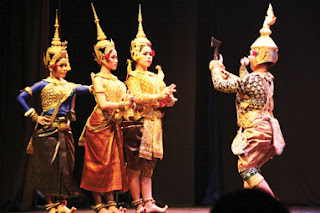 Performers of the makala dance can be seen each Friday night outside Chaktomuk Conference Hall. Photo by: SOVAN PHILONG
http://www.phnompenhpost.com/


via CAAI
Monday, 14 March 2011 15:00 Roth Meas
TOP performers of traditional Cambodian dances will present their art to tourists in a new outdoor show that opened on Friday outside the Chaktomuk Conference Hall in Phnom Penh.
Under the aegis of the Department of Performing Arts at the Ministry of Culture and Fine Arts, the show will run every Friday, according to Ang Kim Eang, president of the Cambodia Association of Travel Agents.
His group is cooperating with the ministry to bring the finest classical traditions to tourists, he said.
Unlike other tourist displays, the show’s artists had performed in big national events and had been fully trained at university level, he said.
About 70 to 80 people are involved in each performance, explained Mao Keng, president of the Department of Performing Arts.
Features of the show include monorom, apsara and makala dances, alongside dances traditional to ethnic minorities in Cambodia.
Another feature of the show was a play in the shadow theatre tradition, which has been named as one of UNESCO’s Intangible Heritage of Humanity.
Tourists don’t often get the chance to see shadow plays, which are rarely performed these days outside cultural events.
Performers were graduates of the Royal University of Fine Arts, many of whom had danced overseas, said Mao Keng.
“They have made the world hear about Cambodian arts, and foreign audiences who have seen them have even made the trip to Cambodia to watch their performance again,” he said.
The decision was made to stage outdoor shows so people could enjoy the riverside scenery and breezes, he added.
Performances for the 90-minute show start every Friday night until May from 7pm. Tickets on sale at the entrance of Chaktomuk Conference Hall cost US$10 for foreigners, and 10,000 riel for Cambodians. Advance tickets cost US$7 from travel agency offices.
If demand continues, extra performances may be added.
Posted by CAAI News Media at 11:11 pm