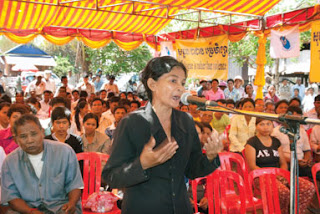 Photo by: Thomas Miller
A villager expresses her concern about a land concession that has been granted in Prey Lang forest during a forum in Tbong Toek village, in Kampong Thom province’s Sandan district, on Friday.
http://www.phnompenhpost.com/


via CAAI
Monday, 14 March 2011 15:02 Thomas Miller
Villagers vented while the government defended its approval of an economic land concession in Prey Lang forest during a public forum in Kampong Thom province’s Sandan district over the weekend.
Officials from five political parties joined roughly 300 villagers from four provinces in Tbong Toek village in Meanrith commune on Friday.
Residents say the 6,044-hectare economic land concession to Vietnamese-owned CRCK Rubber Development Co, Ltd is a threat to their livelihoods and to one of Cambodia’s largest forests.
Ros San, a resident of Popok village in Sandan district, called forcefully for the government to protect the forest, drawing loud applause from many villagers in attendance.
“Many forests have been cut but we still have one – Prey Lang – so we must protect it,” he said.
Chhay, a villager from Preah Vihear province, said people depend on the forest, especially the trees for collecting resin.
“The company clears their trees,” he said. “All people request the government to protect the forest and keep it for all people. People depend on the land and forest, so where can they go, how can they survive?”
People living near the 200,000-hectare forest, which has not been designated as a protected area, have the right to harvest non-timber products such as resin, small wood and other materials for making furniture and hammocks.
Chut Wutty, director of the Natural Resource Protection Group, said resin-bearing trees are “like the farm for poor people” living in the area.
Chut Wutty said residents are concerned that this concession will be the beginning of the end for Prey Lang. “When one [company] starts and gets successful, they get more,” he said.
Government officials have said the area is state-owned land, giving them the right to lease it as they see fit.
The Ministry of Agriculture, Forestry and Fisheries signed a contract granting CRCK a 70-year lease on the plot of land in May last year, following approval from Prime Minister Hun Sen and the Council of Ministers in September 2009, according to documents obtained yesterday by The Post.
The company began operations sometime last month, Chut Wutty said.
Sim Vanna, Sandan district governor, said the concession would bring development to the area, and urged the villagers to work for CRCK.
“Before the company comes, it is quiet, there is no market. Now, there is a big market,” he said. “If you have no skills, the company can teach you.”
Uth Sam An, deputy Kampong Thom provincial governor, said the desires for conservation and development were both worthy of support, but said traditional methods of harvesting in the forest were unsustainable because of population growth.
Government officials suggested local residents submit a complaint, though Seng Sokheng, representative for the Community Peace-building Network, said they have submitted several over the past three years requesting the Ministry of Agriculture, Forestry and Fisheries to stop granting economic land concessions in Prey Lang.
A number of villagers expressed scepticism and wanted to view CRCK and the concession area, which the government said was “degraded forest”, for themselves.
About 20 military police and police blocked the entrance to CRCK grounds, saying they were concerned about a protest, mirroring events late last month when residents were denied access.
Uong Moly, Sandan district police inspector, said the road was private and that police had a duty to protect the company.
Following negotiations with NGOs and journalists, the police allowed one van of journalists to view the corrugated metal fence surrounding the company grounds.
The entrance to the concession area was also guarded by a handful of military police and police, who denied access.
One officer, Chan Moeun, said CRCK paid him 10,000 riels (about US$2.50) per day.
Dense foliage could be viewed from the gate, and about a hundred large, recently-cut logs lined the dirt road approaching the 6,044-hectare concession.
ADDITIONAL REPORTING BY MAY TITTHARA
Posted by CAAI News Media at 11:37 pm

Vigrx's costs are low-cost, and you may pay for that instantly as a result of on-line outlets. Hence, take advantage of Vigrx penis enhancement supplement and extremely seem like the latest newlywed just as before. You will look much better than at any time utilizing Vigrx plus your sex life is going to take appearance profession imagined.