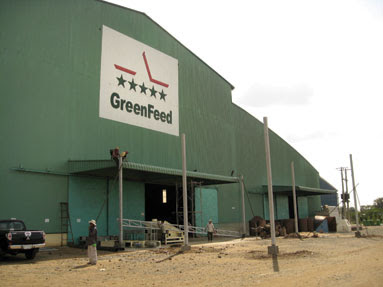 Workers outside the Green Feed plant in Kampong Cham, which was visited by potential investors last week. Photo by: Tom Brennan 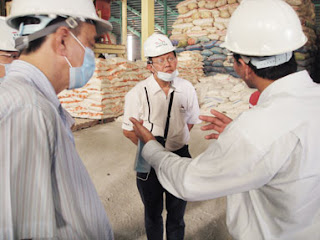 
Monday, 14 March 2011 15:01 Tom Brennan
Kampong Cham Province
JUST off National Road 7, outside Kampong Cham city centre, stands Green Feed’s massive processing plant. Inside, a machine three storeys high mixes raw materials like corn, tapioca and soy bean meal into animal food destined for local poultry and swine farmers.
The engine’s loud rumble nearly drowns out the voice of Pol Kiri Sambath, the company’s finance controller, as he gives a delegation of Singaporean investors, who are taking part in a project to boost small and medium enterprise, a tour of the facility last week.
Green Feed employs 100 permanent staff, in addition to 200 other workers, over two shifts a day, putting out 100 tonnes of product before the last person clocks out. The goal, though, is to reach 120 tons to 150 tonnes a day. And to get there, Pol Kiri Sambath needs some help.
He wants to grow his customer base beyond just medium-sized farms to their larger peers. The problem that faces Pol Kiri Sambath is that he doesn’t have the money to extend credit to these big farms, and banks like ANZ Royal, ACLEDA and others won’t lend Green Feed the money do it. They say the prospects are too risky.
“That’s why I look for funders from outside” Cambodia, he said. That’s where those Singaporean investors come in.
Their visit last week to Kampong Cham province, as well as Svay Reing province, was part of larger trip organised by Cambodia MSME, an initiative funded by the United States Agency for International Development that seeks to bolster local micro, small and medium enterprises.
With so much investment centred in Phnom Penh, the group was trying to generate cash flows in other parts of the country.
While no one expects these two provinces to replace Battambang as Cambodia’s major agricultural centre any time soon, government officials, NGOs and local businessman see the region’s potential.
As Tauch Tiepich, chairman of Svay Reing’s rice millers’ association, said, Kampong Cham and Svay Reing are “moving in that direction”. Though they still have a way to go.
Most of the Singaporean investors cited corruption as a major concern for starting a business in the Kingdom, saying they were somewhat unsure of how to navigate such an environment.
Still, others said the such concerns weren’t enough to keep them away.
“It shouldn’t be something that stops you from investing here,” said Lai Poon Piau, director of Acorn Investments, who was searching for agriculture opportunities in Cambodia.
“Because I think this country offers a lot of opportunities for people with foresight. I believe that I am able to manage most of the business risk.”
Lai Poon Piau is not alone. Lee Kian Heng, who hopes to open cashew processing facilities, said he is looking to start “very soon” though he listed his “number-one concern” as potential government corruption.
Xavier Hu, chief negotiator for SME Funding Advisory, said these issues were just a part of doing business and that Cambodia was not that much different from Vietnam, Indonesia or Malaysia.
“Corruption happens in the whole world,” he said. “In some places, it’s known as donations and lobbying.”
Hu, whose firm finances small and medium-sized enterprises, was approached by Green Feed’s Pol Kiri Sambath for funding.
But SME will only deal with companies that have Singaporean partners, and there are not a lot of Singaporean investors currently in Cambodia.
Still, Hu said he felt he should be able “to work something out.”
If it does work out, the funding could catapult Green Feed to the next level.
That would be a small step toward achieving Pol Kiri Sambath’s vision for his company and Cambodia MSME’s vision for the provinces.
Posted by CAAI News Media at 11:19 pm

Apply 2 to 3 inches of mulch over the plants root system once all foliage
is removed and discarded. Louis, a new delivery tradition has been
created: the "Mulch Man. The less competition, the better off your plants will be.

Use oils that can help keep your hair soft and manageable.
- If your hair feels rough, condition it right away.

From my experience, it is quite difficult to style hair immediately after a hot oil treatment,
so you might want to skip the curling iron or hot rollers.

Low self-esteem, hair fall, itching in scalp and facial skin
infections are common side effects due to dandruff problems.