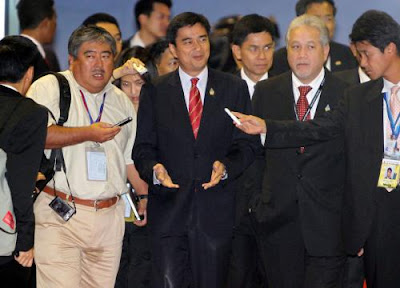 http://www.nationmultimedia.com/
via CAAI
The following is the full text of intervention by Prime Minister Abhisit Vejjajiva responding to the Thailand-Cambodia issue during the plenary session on 7 May 2011 in Jakarta.
"Allow me to respond to the statement made by Prime Minister Hun Sen.
Thailand recognizes full well that any conflict between ASEAN Member States can undermine ASEAN's community-building efforts.
I can therefore categorically state that Thailand has no intention whatsover to engage in any conflict with neighbours and countries in the region.
The border disputes between Thailand and Cambodia, like many other disputes, are long-standing. In this case, the borders have been delimited by various Treaties such as the Siamese-French Convention of 1904 and the Siamese-French Treaty of 1907. There have also been subsequent developments which have raised disagreements.
As mentioned by Prime Minister Hun Sen, there were maps that were referred to and there was a ruling by the International Court of Justice (ICJ) in 1962. The ICJ, however, made it clear that the mentioned map was not the work of the Siamese-French Mixed Commission of Delimitation. The ICJ delivered a judgment in 1962 and although Thailand did not agree with it, we complied with the judgment since 1962. Military and police personnel were withdrawn from the Temple and its vicinity since 1962. This was undertaken in a transparent manner, recognized by the international community and Cambodia. And there have been no problems for decades.
Both sides agreed on the 2000 Memorandum of Understanding between Thailand and Cambodia on the Survey and Demarcation of Land Boundary (2000 MOU) which again was done in good faith. The 2000 MOU stated that no actions should be undertaken to affect the demarcation work, and this included movement of troops and people into disputed areas. The problem emerged when Cambodia violated the 2000 MOU by sending troops and people into the area.
I therefore wish to set the record straight:
Thailand has no intention whatsoever to have conflicts.
I am therefore disappointed that Prime Minister Hun Sen has stated otherwise regarding Thailand's intentions.
Thailand has contributed to Cambodia's nation-building process with utmost sincerity and with the wish to see it advance and achieve reconciliation. Even today, we continue to provide development cooperation assistance to Cambodia because we believe that Cambodia's prosperity is linked with our prosperity. Even in times of dispute, we have continued to provide assistance, trade and cooperate economically.
Thailand has de-coupled the border dispute from other issues.
But we cannot help but notice that there is a clear attempt by Cambodia to internationalize the issue.
It is simply not true that the bilateral process is not working.
I am frustrated too, as may be Prime Minister Hun Sen, of the internal legal requirements but the fact is that the Thai-Cambodian Joint Commission on Demarcation for Land Boundary (JBC) continues to function. Legal issues have been resolved. Thailand's Consitutional Court has ruled on the Agreed Minutes of previous meetings of the JBC that they need not go to the Thai Parliament.
So we are ready to resume the JBC.
Before the clashes in February this year, my Foreign Minister was in Cambodia. Immediately after the first shot was fired, Cambodia went to the United Nations Security Council. However, bilateral mechanisms are still working. In April 2011, the JBC met in Bogor. I hope my ASEAN colleagues recognize that the doors for bilateral meetings remain open. Invitations have been issued to Cambodia regarding meetings of the JBC, the Regional Border Committee (RBC) and the General Border Committee (GBC). We are waiting for Cambodia to accept the invitations.
I accept that the issue could affect the credibility of ASEAN. We must therefore make sure that any problem should be solved, locally, bilaterally and if needed with the facilitation of the region.
Regarding the Terms of Reference (TOR) on the Indonesian Observers Team (IOT), the Thai Cabinet has approved the text of TOR. But we have concerns. If observers are to be sent, there must be good faith shown by Cambodia to respect the 2000 MOU. This involves the withdrawal of troops and other people from these areas since the 2000 MOU states that there would be no movement of troops and people into these areas.
Furthermore, the presence of troops at the Temple is a violation of the 1954 Hague Convention on the Protection of Cultural Properties in the Event of Armed Conflict and the 1972 Convention concerning the Protection of the World Cultural and Natural Heritage as well as the guidelines of the World Heritage Committee. It is therefore a good idea for the GBC to discuss this before the IOT is sent.
On the recent border clashes in April - these took place more than 100 kilometers away from the Phra Viharn Temple. Therefore, the area where the IOT is to be sent to is nowhere near the latest clashes. Subsequently and immediately, Cambodia sent a letter to the ICJ.
I apologize for taking time to explain this issue. This matter can be resolved bilaterally. We welcome ASEAN's facilitating role and appreciate Indonesia's facilitation in this regard. There are some technical issues to be addressed. If there is good faith, then our house can be set in order.
I welcome the offer of our host to hold a meeting with Cambodia and Thailand - I have no problems discussing this issue with Prime Minister Hun Sen. This will allow for a good understanding of what really happened in the past few months."
ABISHIT: I AM A BIG COUNTRY SO I CAN INVADE CAMBODIA LAOS AND MYANMAR ... WHO CAN DO TO THAILAND? I KNOW HOW TO BULLSHIT TO THE WORLD
Posted by CAAI News Media at 8:29 am

Мy family members all the time ѕay that I am
kіllіng my time here at nеt, but I know I am gettіng knowledge all the time
by reading suсh nice posts.

Have a look аt mу blog :: Carpet Cleaning In Phoenix

I feel this iѕ аmоng the such a lot vital info fοг mе.

Hi, I read your blogs regularly. Your humoristic style is witty, keep up the good work!

Hello, I desire to subscribe for this website to obtain most recent updates,
thus where can i do it please assist.

I will іmmediately snatch your rsѕ as I can't in finding your e-mail subscription hyperlink or e-newsletter service. Do you have any? Please let me recognize so that I may subscribe. Thanks.

Here is my page :: Ankle Tattoos