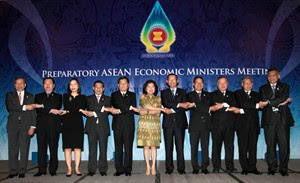 via CAAI
Niniek Karmini, The Associated Press
JAKARTA, Indonesia — A bloody border dispute between Thailand and Cambodia is expected to hijack talks between Southeast Asian leaders trying boost regional security and ease economic disparities across borders.
Another hot topic at the two-day summit that opens Saturday will be Myanmar's request to chair the 10-member Association of Southeast Asian Nations, or ASEAN, in 2014. Some countries say it's ready, but others argue the government has not yet done enough to improve human rights.
Presidents and prime ministers started filing into the tightly guarded summit venue in the Indonesian capital to talk about their long-stated goal of building a competitive and highly integrated economic region.
That will mean everything from improving road, rail and other transportation links to finding ways to guarantee food security and overcome vast energy challenges.
But regional security concerns such as the potentially oil-rich Spratlys islands claimed by China and several ASEAN nations — a dispute that worries the U.S. as well — and terrorism following the death of Osama bin Laden will likely steal the show.
The most pressing issue is renewed fighting along the border of Thailand and Cambodia, which has claimed nearly 20 lives in the last two weeks, sending tens of thousands of people fleeing their homes.
As current chair of ASEAN, Indonesia has been trying to help mediate the dispute over small parcels of land claimed by both countries, but has so far made little headway.
Cambodian Prime Minister Hun Sen said he wants ASEAN to oversee a permanent cease-fire, according to his top adviser, Sri Thamrong, but Thailand still believes the problem should be settled bilaterally or through the International Court of Justice.
Meanwhile, Myanmar's president, Thein Sein, who heads the military-backed party that overwhelmingly won general elections late last year, will ask for the right to chair ASEAN in 2014.
The regional grouping is supposed to rotate its chair every year between member countries — Brunei, Cambodia, Indonesia, Laos, Malaysia, Myanmar, the Philippines, Singapore, Thailand and Vietnam.
Myanmar was forced to skip its turn in 2005, however, after coming under heavy pressure from the international community over slow progress on national reconciliation and human rights.
Thailand and several other countries have indicated they wouldn't stand in the way.
Singapore said it would be better to push back the date because of lingering concerns about human rights abuses.
Posted by CAAI News Media at 7:32 am