Opposition request for paliamentary role is rejected by Assembly 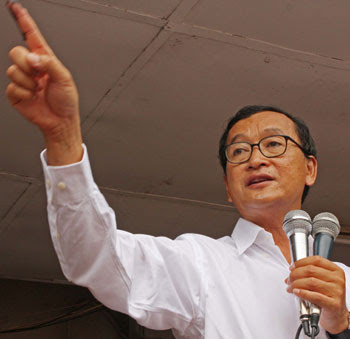 THE Permanent Commission of the National Assembly rejected this week a request by the opposition Sam Rainsy Party for official recognition by the body and a guaranteed role in Parliament.

The commission said Tuesday the request, submitted by letter, was an illegal attempt to amend Assembly regulations.

SRP lawmaker Son Chhay told journalists Wednesday the Commission's rejection was based on a misunderstanding. The letter submitted by the party was not a request for amending regulations but an attempt to remind the Assembly of comments previously made by Prime Minister Hun Sen.

"The SRP did not request an amendment to the internal regulations of the Assembly. We wrote a letter last week to remind the chairman of the Assembly of what Prime Minister Hun Sen said after the first meeting," he said.

"Samdech Hun Sen said he will accept requests by the SRP to rearrange the Assembly's regulations to guarantee an official role for the opposition," Son Chhay said.

The president of the SRP submitted the letter only to remind Assembly Chairman Heng Samrin of this fact, he said.

"We also included in the letter an assessment by a foreign expert, who also supported giving opposition parties an official role in Parliament," he said.

"The decision of the Commission seems to suggest we requested new regulations, but we have not done this. We know that to do so would require approval of one-fourth of the Assembly, and the SRP doesn't have those numbers," Son Chhay said.

"We rejected the letter because the request was illegal. Samdech Hun Sen said we must guarantee a role for opposition parties, but that the assembly must verify the validity of any such requests. So, the assembly saw it was illegal and must be rejected," Cheam Yeap said.

Thun Saray, president of the rights group Adhoc, said the offer of a guaranteed role in government was simply a political tactic to get the SRP to attend the Assembly's swearing-in ceremony in September.

Hun Sen told journalists after the convening of the Assembly on September 24 that he guaranteed an official role for the opposition in Parliament.
Posted by CAAI News Media at 9:28 pm