Bankruptcy looms over Cambodian side of tribunal 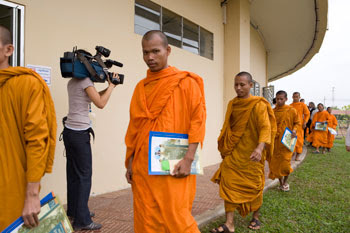 Without donations over the next month, Cambodian employees of the the Khmer Rouge court could be working for free

DONOR countries to the Khmer Rouge tribunal have commended the war crimes court for beginning its first trial on Tuesday, a step it claims moves Cambodia much closer to achieving justice and national reconciliation.

But as congratulatory messages flood in, donors remain silent on further pledges to the financially troubled chambers, failing to allay fears by officials that the court's Cambodian side looks set to become bankrupt by the end of the month.

In a press statement Wednesday, the French Foreign and European Affairs Ministry said they would continue to support the tribunal, but made no further pledges.

"France welcomes the starting of the first initial hearing at ECCC, a fruit of cooperation between Cambodian and international justice," it said.

According to a report released last week by court monitor Open Society Justice Initiative, the Cambodian side of the court could be bankrupt in a matter of weeks, despite recent donations.
Court officials Thursday confirmed this.

"We may not have any money to run the court next month," court spokesman Reach Sambath told the Post.

Congratulations, but no cash
The court's largest donor, Japan, also commended the court's achievements, but did not indicate any further pledges.
"Japan heartily welcomes the holding of the initial hearing of the Khmer Rouge tribunal," a press release from Japan's Ministry of Foreign Affairs said Tuesday.

Raising additional funds for the court has long been a problem for the court, in part because of its failure to address concerns about corruption and independence, the OSJI report said.

This led the UN Development Program, which was administering donor funds to the Cambodian side of the court, to freeze funding last July.

"It will be difficult for some staff because they need a salary to support their daily life, but this is not new to us," Reach Sambath said, referring to a two-month period after the funding freeze last year in which employees worked unpaid.

"We trust our staff's commitment to keep working ... but I don't think the international side can support the running of the court [for long]," he added.
Posted by CAAI News Media at 10:17 pm