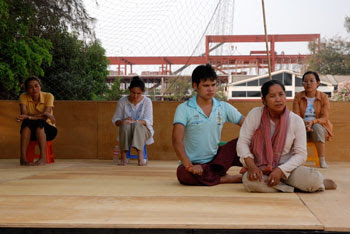 AGAINST the backdrop of the Khmer Rouge tribunal's trial of Kaing Guek Eav, better known as Duch, which opened this week, Amrita Performing Arts on Saturday will debut its newest production, Breaking the Silence, a play based on the memories of those who lived through the Khmer Rouge regime.

The play, which features four Cambodian women who each perform various roles, incorporates elements of drama, poetry, music and dance to recount the horrors of the Khmer Rouge era.

"This play is for a Cambodian audience and is all about reconciliation for those who suffered through the Khmer Rouge," said Fred Frumberg, director of the Amrita Performing Arts, who has more than 25 years of experience in the performing arts and serves as director of production for the Paris Opera.

Accompanying the new production will be an outreach program available to those audience members who wish to discuss their experiences under the Khmer Rouge with a trained professional, Frumberg said.

This will be particularly important when the production tours this month to eight provincial areas of Cambodia, he said.
Dutch director Annemarie Prins will head production of the play, which is based on more than 30 first-hand accounts from Khmer Rouge survivors that she collected over the course of more than a year.

"Annemarie arrived [in Cambodia] in January last year to interview about 30 victims of the Khmer Rogue, collecting hours and hours' worth of taped testimonies," Frumberg said.

When Prins returned to Holland, she drew on the collected testimonies to write Breaking the Silence, which was in turn translated back into Khmer.

Generating discussion
This is not the first play produced by Amrita Performing Arts that has tackled some of Cambodia's darkest historical issues.
Four years ago, Frumberg was astounded at the amount of discussion generated by his play Photographs of S-21.

"At the end of the show, we were so surprised to see so many people standing up in the audience to share their experiences," he said, adding that he hoped Breaking the Silence would generate as much conversation and discussion among audiences.

Frumberg added that he has faith that the production will help the silence to be broken concerning the Khmer Rouge.
"Hopefully, the arts can now be a part of therapy transition in Cambodia."

In addition to the entertainment value and therapeutic merits of the play, Frumberg also stressed the importance of "capacity building" for the Cambodian arts sector.

"There are around 30 people involved in the show, all of whom are Cambodian, and are being given the opportunity to work with international set designers and directors - for us this is very exciting," he said. Breaking the Silence opens on Saturday at 6:30pm at Phnom Penh's Exhibition Hall on Sisowath Quay. Admission is free.
Posted by CAAI News Media at 9:46 pm