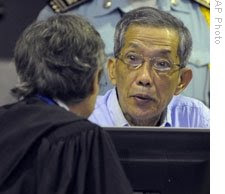 The US welcomed the opening trial of the Khmer Rouge tribunal, for Kaing Kek Iev, the head of Tuol Sleng prison, as an initial hearing got underway this week.

The Trial Chamber of the tribunal had a two-day initial hearing for Duch Tuesday and Wednesday, the first trial for a UN-backed tribunal that opened in 2006 after a decade of negotiations and stalling.

Duch, 66, is charged with war crimes, crimes against humanity, torture and murder for his role as chief of the prison, known as S-21.

He recognized all the charges against him and wanted to answer the questions that surviving Cambodians have about the prison, Roux said.

If Duch admits to wrongdoing and apologizes, he will be the first Khmer Rouge cadre to accept blame for deaths under the regime, which in under four years amounted to more than 1.7 million people.

Four other leaders of the regime—Nuon Chea, Khieu Samphan, Ieng Sary and Ieng Thirith—have declared they were unaware of the mass killings going on under their stewardship. Court officials Chea Leang, Robert Petit, Marcel Lemond and a lawyer for civil parties, Hong Kim Suon, all marked the initial hearing as a positive step toward “justice” for victims.

However, Duch’s hearing opened amid lingering criticism of the tribunal, for allegations of corruption and mismanagement, which had caused some donors to freeze funding.

The US has so far pledged but not delivered $1.5 million for the tribunal, and Duguid said Wednesday the US “believes the court has made significant strides to overcome international concern about corruption and mismanagement.”

However, he said, the court “must continue to be pro-active in preventing corruption and addressing the previous allegations."

A senior UN legal official, Peter Taksoe-Jensen, is due to travel to Cambodia for a second time in coming weeks for tribunal discussions.
Posted by CAAI News Media at 7:24 am