Bugged in the right direction 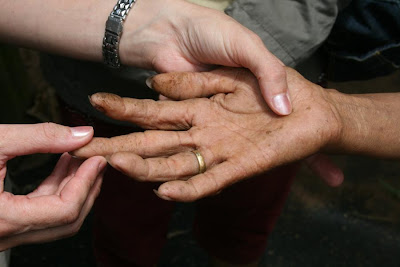 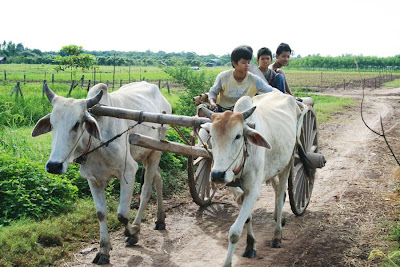 Photo by Courtesy Photo / William Daniell.
Boys from the Kien Svay district in Cambodia take a ride on an ox cart. 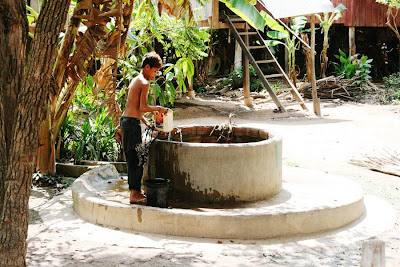 Photo by Courtesy Photo / William Daniell.
A boy from the village of Preak Ruessei in Cambodia gathers water from a well. 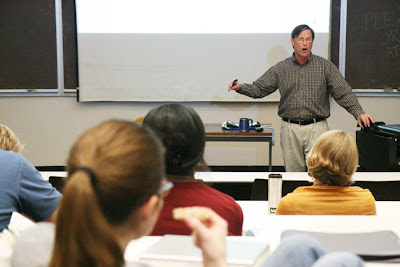 Photo by Daniel Kim.
William Daniell lectures about risk communication in his evironmental health class. Daniell was recently named the Rhom and Haas professor of public health sciences.
The Daily

Sometimes it takes a compassionate outsider who’s interested in karaoke to recognize the need for an environmental change.

William Daniell, associate professor of environmental and occupational health sciences, started working with colleague Matthew Keifer on his Fogarty Grant that dealt with global health problems in Southeast Asia and Central America. In 2005, they decided to specifically focus on Southeast Asia; in Thailand, Vietnam, Laos and Cambodia. During a visit to Cambodia, Daniell found his passion.

“I was attracted to the country even though it was a short stay,” Daniell said. “There was no shortage of environmental and occupational health problems. I was drawn by the people and the plethora of problems in Cambodia.”

The recipient is given a no-strings-attached endowment for five years to engage in research pertaining to chemical problems that are health related.

Daniell’s research will primarily focus on environmental health problems in Southeast Asia, particularly Cambodia. He has been working on multiple projects, such as exploring the naturally occurring arsenic in drinking water, which he would like to integrate into the Rohm and Haas research — his chief objective is on the country’s pesticides problem.

“My focus will be on pesticide use, pesticide exposure, pesticide poisoning particularly in farmers and their families, policy aspects and vendors that sell pesticides,” Daniell said.

Native Cambodians are often exposed to pesticides, and Daniell would like to explore how often they are exposed and the quantifiable amount they are exposed to. He wants to look at pesticide poisoning due to the lack of information on products, such as warning labels.

Daniell is interested in the issue of a language barrier. Information on products may be written in a different language, such as Chinese, and this causes difficulty for farmers who are illiterate.

The policy aspect of pesticides is another concern he will look into. The World Health Organization (WHO) classifies pesticides based on their toxicity into three levels: I “extremely hazardous,” II “moderately hazardous” and III “slightly hazardous,” according to their Web site. The Cambodian government currently has bans on level I and II pesticides.

“People recognize the need for rural regulation, but it doesn’t happen, because there are barriers to the rules, opposition from industries, the government is not fully functional or there’s poor communication between branches of the government,” Daniell said.

Through his research Daniell wants to look at what happens when new information is given to branches of the government, such as the Cambodia Ministry of Health, and see if it results in any significant policy changes.

“It’s a chance to test the system to see what works and doesn’t work,” he said.

A separate interest of Daniell’s is to look at the effectiveness of nontraditional health communication. While in Cambodia, he worked with Resource Development International (RDI), a non-governmental organization, who found an unconventional way of communicating to the rural audiences of Cambodia: karaoke.

Karaoke is a major part of Cambodian culture; even the most rural of villages will have a set up of karaoke, Daniell explained.

RDI explores different avenues of communication such as karaoke, puppet shows for all ages and television shows that teach villagers about the dangers of arsenic in water and as well as other important health messages.

But Daniell is not just focused on his own research. He assists organizations that need help conducting research or organizations that could still use a lending hand, such as RDI and the Cambodia National Institute of Public Health.

By serving as a mediator, he can connect different organizations that are working on similar projects and have compatible interests.

As a mediator, it’s easy to find things for both students and faculty to participate in, Daniell said.

Erica Finsness, a recent graduate in public health from the UW Department of Environmental and Occupational Health, traveled to Cambodia and worked with RDI for a month with the help of Daniell and other faculty members in the same department. Daniell was Finsness’ faculty adviser and mentored her in aspects of her trip to Cambodia.

“I think he’s very supportive of student ideas even if they’re somewhat unconventional,” Finsness said. “He has a real dedication to research that is readily applied and to make an effort to make himself accessible to students.”

Continuing with his passion for working with students and global health, Daniell was asked by the Department of Global Health to develop an environmental health course that will emphasize the importance of the environment in developing countries.

“What [Daniell will] be able to do is bring to the global health course a level of awareness on the pervasiveness to the problems in global health,” Keifer said.

A majority of people spend their lives working and hazards come with the job, Keifer said. The potential for something in work to affect health is enormous; it’s potentially worse in an international setting.

“[The course] creates an opportunity for [the students’] sensitization to be raised in environmental and global health issues,” Keifer said.

Daniell hopes that the class will be ready in the next academic year.

“The main goal is for students to appreciate how important the environment is in developing countries,” he said.