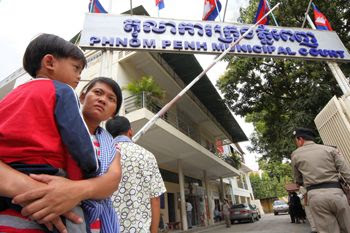 7NG accuses Dey Krahorm representatives of inciting violence among residents in 2007 incident that it says led to destruction of its equipment and injury of a vehicle operator.

PHNOM Penh's Municipal Court on Monday is to rule on charges of inciting destruction of property filed by private developer 7NG against representatives of the Dey Krahorm shanty community it evicted last month, presiding judge Chey Sovann said Wednesday after a three-hour hearing.

7NG and the municipality late last month launched a blitz eviction of the scores of families remaining in the 3.6-hectare community who had declined compensation ranging from a relocation home to US$20,000 offered to them by 7NG. The company says it will develop the site into luxury office buildings.

The charges stem from an incident in December 2007, in which residents allegedly destroyed a 7NG excavator and injured its driver after the vehicle was brought into the area late at night.

Chan Vichet, Ly Yuleng and Bun Thoeun were accused of inciting violence by residents, who after the incident said they had feared a rapid, unnacounced eviction.

Ly Yuleng denied the machine was damaged or that she or the other accused had encouraged residents to use violence.

"People were just protecting their homes," she said.

Chan Vichet said that during the incident he appealed to residents over a loudspeaker to keep their calm but that the implications of the late-night arrival of the large machine were too strong for residents to dismiss.

After the hearing Wednesday, Sann Sokunthea, one of three lawyers provided to the defendants by the rights group Licadho, said the charges were baseless.

She said court officials received the police report before the incident even took place.

Plong Sophal, a lawyer for 7NG, told the court the charges were supported by eyewitness testimony from 17 people, although he did not produce any witnesses in court.

The court read testimony from the 7NG worker, Ing Va, who said as many as 300 residents threw stones at him and attacked the excavator he was driving.

Wednesday’s hearing was the third, and apparently last, time the court would convene for the case.
Posted by CAAI News Media at 10:21 pm