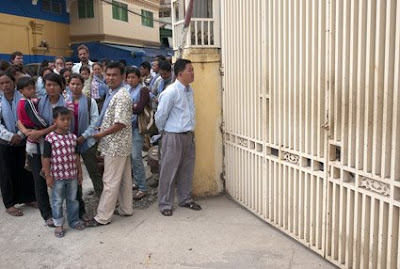 Phnom Penh (Cambodia), 11/02/2009. Former Dey Krohom residents insisted on entering the court room in the Municipal Court of Phnom Penh to attend the trial of three of them.
© John Vink / Magnum
Ka-set
By Ros Dina
11-02-2009

On Wednesday February 11th, three residents of the Dey Krohom community – which last homes were destroyed on January 24th by the 7NG company – appeared before the Municipal Court of Phnom Penh to answer charges of destruction of private property and assault. Chan Vichet, Khieu Bunthoeun and Ms Ly Youleng are accused by the company of torching an excavator and throwing rocks and bottles filled with gasoline at three 7NG employees, in the night of December 3rd 2007. Back then, the tension was high between the two parties, with groups of youth hired by 7NG striving to provoke and intimidate the families refusing to leave.

Curiously identical statements...
On one side, seven witnesses for the defence – residents of Dey Krohom – who swear that the three defendants have never committed any act of violence and on the contrary, when he heard cries and discovered residents were throwing projectiles at 7NG employees, Chan Vichet had hurriedly found a microphone to urge them to be peaceful and not resort to violence. On the other side, the statements of 17 employees of 7NG, including the three victims, who accuse the same three defendants of provoking the violence. These statements were read successively, until the clerk interrupted her reading at the 7th one because they repeated each other so much. One defence lawyer even counted the – significant – number of sentences which exact wording was found in one statement after another... “Look, they have so little evidence against my clients that they have duplicated the statements!”, the lawyer remarked.

In the complaint filed by the lawyer for 7NG, the latter demands that the three defendants be condemned and pay 10,000 dollars in compensation. Also, the report of the quarter [sangkat] chief, which was presented to the Chamkarmon district authorities, mentions a truck transporting an excavator which reportedly got lost and stopped near the Russian Embassy, close to Dey Krohom, and was said to have been targeted by residents. Neither the company lawyer, the victims or the prosecution witnesses came to the hearing.

For the Prosecutor, who credited the version of events given by the 7NG employees, the three defendants were indeed present at the place and time of the incidents. He considered the defence witnesses unreliable because it was dark and they were all standing far away from the scene. Yet, all claim they have heard Chan Vichet's voice on the microphone trying to appease the angry residents. But that seems irrelevant – for him, the three have participated to the wrongdoing and the charges against them must therefore be upheld.

Defence denounces evidence as too inconsistent
On the defence side, Attorney Hom Bunrith, delivered a series of arguments. He acknowledged that trouble had happened on that night, but he explained that his clients were at their homes and only came out after hearing cries outside. He then asked to be shown the evidence of their participation to the violence. “If so, why have so many people heard Chan Vichet's voice trying to calm people down?”, he argued. He also deplored the lack of any precise assessment of the damage caused. “In today's hearing, each and every one is recreating the events in their minds in their own way! The versions of the victims and Dey Krohom residents contradict one another on every single point!”

During a previous hearing, the lawyer had seized the opportunity to interrogate the victims and point out some irregularities. For example, one said he had recognised Chan Vichet's face thanks to the lit headlights of the excavator – a power break had plunged the neighbourhood into darkness – while another, the excavator's driver, claimed that the headlights of his machine were turned off... Another swore he had identified Chan Vichet although he could not remember what clothes he was wearing... “It can be concluded that the 17 statements of 7NG employees were completely fabricated, all the more so as they bear too much similarity to be credible,” Attorney Hom Bunrith commented.

He also found the requests for compensation doubtful. “One of the victims is asking for 5,000 dollars, but the hospital bill only shows 30,000 riels [7.5 dollars]?!” The lawyer concluded that the documents produced by the prosecution included too many grey areas to ascribe them any real credibility.

Following him, Attorney Ke Chamnan wondered with false candour how out of all the rocks thrown by some 200 residents, only one hit the 7NG guard, although he claimed he was standing near the excavator being targeted, “How is that possible?” The third defence lawyer, Attorney San Sokunthea, stressed that it was natural for the victims to take their employer's side. All three attorneys called for the charges against their clients to be lifted.

The three defendants, made emotional by appearing before the judicial system, calmly left the court room, which was packed with human rights observers and activists. Outside, Ms Ly Youleng lit incense sticks and prayed in front of an altar.

The Court will issue its verdict on Monday February 16th.
Posted by CAAI News Media at 10:40 pm