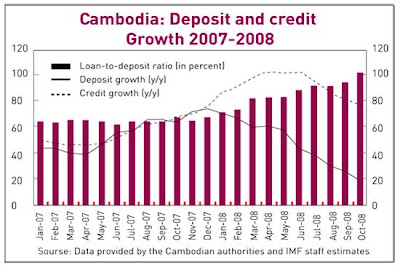 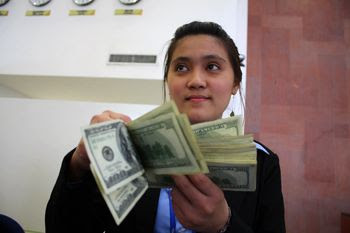 Photo by: Heng Chivoan
More oversight is needed if Cambodian banks are to weather the storm, says an IMF report.
The Phnom Penh Post

Nonperforming loans could soar to 13 percent and reserves fall below limits if deposits and foreign capital continue to shrink, says new report

Cambodia's banks are under threat from rising nonperforming loans, slow deposit growth and low liquidity, according to an International Monetary Fund report released this week.

If the situation deteriorates, some banks could be unable to meet the government's minimum capital requirements, the report says.

"The global financial crisis has exposed vulnerabilities among Cambodia's banks and is beginning to affect their financial soundness," it says.

The annual economic review adds that poor compliance with reporting rules could mean Cambodian banks are even worse off than thought.

The IMF assessment adds to warnings that the global financial crisis is spreading to Cambodia's banking industry - a sector that until recently was seen as a pillar of stability amidst falling garment exports and dwindling tourist arrivals.

More supervision needed
The IMF's resident representative for Cambodia said the report highlighted the risks that Cambodian banks face in 2009 but did not serve as a negative forecast for the sector.

But John Nelmes told the Post Wednesday the report was a warning the National Bank of Cambodia (NBC) needed to watch closely the sector in 2009.

"There is a real need for the NBC to supervise these banks," he said.

"[The NBC] has got to be the first line of defence. ... In that sense, that's where we really need to see careful work. The NBC has to increase surveillance of the banking sector," he said. He added that the IMF noted improvements in NBC monitoring last year.

Nelmes stressed that although liquidity was a growing concern and local banks faced the double hit of falling deposits and declining foreign capital, the IMF did not "expect [Cambodian] banks to run into trouble [in 2009]".

There is a real need for the national bank ... to supervise these banks.

The report says liquidity shortages have arisen at some banks. "In response, banks have been raising deposit rates, drawing excess reserves and, in a few cases, borrowing from abroad," it says.

An extreme scenario illustrated by the IMF shows non-performing loans rising to a startling 13 percent, with six banks falling short of the government's risk-weighted capital ratio of 15 percent.

Falling property prices have also put pressure on the sector, the report says. "Large withdrawals have reportedly been made by firms concentrated in the property sector, notably Korean-owned banks."

"I think that liquidity is very tight [in the banking sector as a whole], and deposits have fallen by about one-sixth ... ACLEDA's deposits have remained steady." ACLEDA is one of the few banks that has expanded recently by increasing its ATM coverage and launching new branches in Laos.

Both the IMF and World Bank warned that a number of banks were especially at risk.

The IMF report says "several large [banks] could face a large deterioration in credit quality and a need for recapitalisation, depending on the magnitude of the current slowdown".

Spokesmen for the IMF and the World Bank would not name the banks in question, but industry sources have identified Canadia and Vattanac Bank as of particular concern.

"These banks are believed to be overexposed to the property sector," one anonymous source said. "We are also watching a couple of others."

He said that the bank's liquidity and deposits been steady over the past three months.
Vattanac Bank would not respond to requests for comment.
Posted by CAAI News Media at 9:47 pm