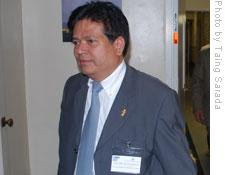 Cambodia likely will be waiting a long time for an anti-corruption law to be passed, with the next move up to the government, an opposition parliamentarian told “Hello VOA” Monday.

Yem Ponhearith, a lawmaker for the Human Rights Party, which has three seats in the National Assembly, told “Hello VOA” in an interview in Washington that anti-corruption legislation has been in the making for more than a decade and there were no signs it had support now.

Donors have pushed hard for anti-corruption reform, while Cambodia is viewed as one of the most corrupt countries in Asia.

The government recently lashed out against statements by US Ambassador Carol Rodley, who estimated the country loses $500 million per year to corruption.

“The most important matter is to make sure the law can be out for implementation, and the question of effective implementation or not that is another issue,” Yem Ponhearith said. “The law should be passed and promulgated first.”

Responsibility for the law was currently in the hands of the administrative government and not the National Assembly, he said.
Posted by CAAI News Media at 7:47 am