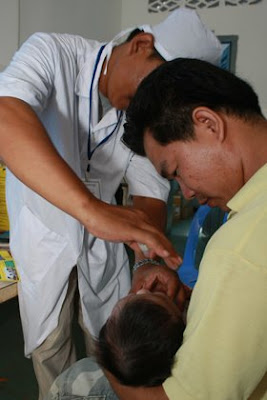 Photo by: SOVANN PHILONG
A newborn child is given a dose of antiretrovirals to prevent vertical HIV transmission.

Experts say more testing could lower the prevalence of HIV, which in 2006 infected 0.9 percent of adults in the Kingdom

HIV/AIDS testing increased by more than 1,200 percent in 2008, according to a report released last week, a trend welcomed by health professionals who said it could reduce HIV prevalence - particularly by lowering mother-to-child transmission, which accounts for one-third of Cambodia's new infections.

The report from the National Centre for HIV/AIDS, Dermatology and Sexually Transmitted Diseases (NCHADS) states that 400,000 people took HIV blood tests last year, up from just 30,000 in 2007.

Of those who opted for the tests, 5 percent were found to be HIV-positive, compared with 7 percent in 2007.
NCHADS Director Mean Chhi Vun said he attributed the jump to a campaign promoting free and anonymous testing.

"Our campaign about free, anonymous testing has been very successful," he said. "We believe that more people will come to have their blood tested in 2009 because people are more aware of the risk of HIV/AIDS."

He added: "That more and more people have their blood tested for HIV/AIDS is a very good sign."
This year, he said, NCHADS hopes to see 700,000 people take HIV tests.

Mean Chhi Vun said health professionals were working in particular to reduce mother-to-child transmission, noting that HIV tests are being offered to more of the Kingdom's expectant mothers when they come in for antenatal checkups at state health centres.

NCHADS is partnering with the National AIDS Authority in targeting expectant mothers.

"We encourage people, especially [high-risk groups such as] sex workers and also pregnant women, to be brave to have their blood tested because we want this problem to be in the open so we can reduce the spread of HIV/AIDS," authority President Tia Phalla said.

"If they are still shy and still try to hide, this will cause two bad effects: They will die sooner than they should, and the disease could spread to others, especially [the partners] and children of infected individuals," he added.

The AIDS Authority and NCHADS provided some kind of HIV/AIDS testing or information to 27 percent of expectant mothers in 2008.

Tia Phalla said he wants to reach 40 percent by 2010.
"According to our research, wives are more receptive to HIV campaigns than their husbands," he said.

Tests are now available at more than 200 private and public clinics, most of which offer free, anonymous testing and follow-up services.

Tia Phalla emphasised that all HIV testing was voluntary, adding that education campaigns have been designed to explain to people the benefits of knowing their HIV status.

Chak Chanda, clinic manager for the Reproductive Health Association of Cambodia, said the quality of service available to Cambodians who opt for voluntary tests has improved significantly.

"We do not just test their blood immediately when they arrive, but we also give them counseling and all results are anonymous," she said.

The estimated HIV prevalence among Cambodian adults in 2006 was 0.9 percent, according to government figures.
Posted by CAAI News Media at 9:56 pm