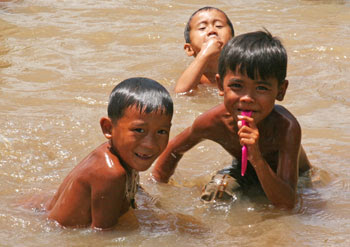 Photo by: Tracey Shelton
Children play in a stream on the road to Ratanakkiri. Water from the Sesan River dam in Vietnam has reportedly polluted water downstream throughout the Ratanakkiri river system.

STAGNANT reservoirs formed by hydropower dams on the Sesan River have led to high levels of toxic algae and bacteria that could poison tens of thousands of people living downstream in Ratanakkiri province, according to a new report distributed Tuesday by the 3S Rivers Protection Network.

Research conducted by Anna Madeleine Tiodolf from the Norwegian University of Life Sciences confirmed the presence of cyanobacteria, or blue-green algae, and cyanotoxins in the Sesan. According to a press release distributed with a technical brief on Tiodolf's fndings, cyanotoxins "are cancerous to the liver after longer periods of exposure".

The release also cited other reported health problems that could be explained by the findings, including gastric disorders and skin problems.

Cyanobacteria was not detected in three Sesan tributaries, indicating that it was caused by large reservoirs of stagnant water created by dams upstream in Vietnam, according to the press release.

One of the largest tributaries of the Mekong River, the Sesan has a drainage area of 17,000 square kilometres, 6,000 of which are in Cambodia.
Most of the people living in the river basin are members of ethnic minority groups. The press release cited a 2000 Fisheries Administration estimate that roughly 28,000 people "rely on the Sesan River for their drinking water, fishing, bathing and feeding livestock".

Meach Mean, coordinator for the 3S Rivers Protection Network, said Tuesday that villagers were particularly at risk during the dry season.

"People face a lot of problems during the dry season because most of them get their water directly from the river, and there is no rainwater to dilute the river water," he said.

Ka Lanthy, who serves as a representative for villagers who claim to have been affected by dam projects, said villagers were "afraid to cross the river because it gives us skin problems".

He added that officials "should be thinking about this case because a lot of people just can't use the water".

Pich Dun, secretary general of the Cambodian National Mekong Committee, could not be reached for comment Tuesday.
Posted by CAAI News Media at 10:44 pm