Vanished producers hope to spur a resurgence in local filmmaking 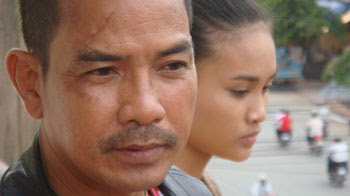 Pov Pisan, who plays the cynical detective, Heng, with Savay Sakana, who plays Maly, during a scene from the movie Vanished. PHOTO SUPPLIED

The craze for a recently released Khmer thriller playing to sold-out screens in Phnom Penh suggests there just might be a market, and a profitable one, for quality Cambodian cinema

The teenagers packed into the cinema at Sorya on a weekday afternoon are so loud and excitable I think maybe they've had too much Coca-Cola.

As the tension rises just a few minutes into the film and the first shocking moment is revealed, audience members jump out of their seats and scream their collective heads off.

The film that has everybody queuing up to be frightened is Vanished, a modern-day thriller set in Phnom Penh.

British producer Matthew Robinson and his team at Khmer Mekong Films (KMF) have raised the bar for local film productions with this new effort, producing a stylish, contemporary film that keeps the audience guessing right to the end.

Not for KMF the familiar regional style of filmmaking, with its over-the-top use of video effects and hard-to-follow supernatural storylines; Robinson's aim in creating Vanished was to "present Cambodia in a modern light; to make a contemporary film about Cambodians and wrap it up in a thriller". 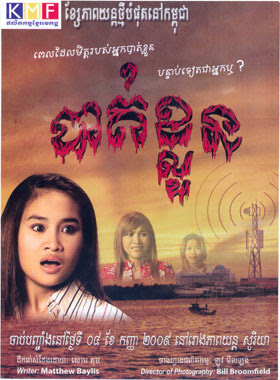 KMF has been building a solid team of local talent for the past six years since Robinson relocated to Phnom Penh to work on the BBC series Taste of Life.

The film is based on three young Cambodian women working at a hip radio station, Heart FM.
When two of the women mysteriously disappear, radio presenter Maly realises her life is in danger.

She joins forces with her co-workers and the local police detective to find out what happened to them, all the while being hunted by the mystery abductor.

Vanished uses classic, Hitchcock-inspired thriller twists and turns to keep viewers on the edges of their seats.

Watching the film with a Cambodian audience is an entertaining delight, as they don't hold back with their reactions.
"It's been thrilling," agrees Robinson. "They're jumping at all the right moments."

Writer Matt Baylis has come up with a well-crafted story - with input from KMF's Cambodian writers - that is both universal and uniquely Cambodian.

The film touches on themes of independence, as the girls are trying to live independent lives and make their own way in the world.

It shows them challenging social hierarchies at work, standing up to their boss and to society's narrow vision of how young women should behave.
Vanished also focuses on a central theme of who can be trusted - weaving a pervasive culture of suspicion.

"It's old versus new, traditional versus modern thinking", says Robinson.

"We're trying to give a platform for young Cambodians to see that they can have an independent life."
KMF has high hopes for the film, which cost "more than double" the typical US$20,000 budget for locally produced features.

If audiences keep coming back for more after producing high, first-week attendance figures, KMF looks set to recover much of that investment - so long as the pirates can be kept at bay.

If a DVD copy of the film hits the streets, the filmmakers know it's all over.

"Once it's out, it's out," says Robinson.
"If someone goes and pinches the DVD, then it's got no value. It is literally theft."

To prevent this sad, seemingly inevitable turn of events, a KMF staff member has to carry the screening copy by hand into the cinema each day - as well as supervise the projection to ensure that it is kept away from rapacious pirates.

The filmmakers hope to screen the film at international festivals and use its momentum to propel KMF into bigger and better projects.

The film screens with well-authored English subtitles and isn't just aimed at locals - it also serves as a fantastic introduction to local culture for foreigners keen to sample Cambodian cinema. More, please!

Vanished is currently screening at the cinema on the fifth floor of Sorya mall in Phnom Penh.
It opens at the Baray Ondet Cinema in Siem Reap this Friday.
Posted by CAAI News Media at 10:20 pm