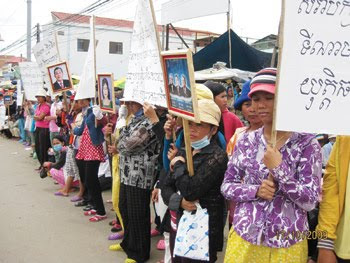 PARLIAMENTARIANS continued debate on Tuesday over the government’s proposed law to regulate public demonstrations, with the National Assembly passing chapters three and four of the six-chapter law.

The opposition Sam Rainsy Party declined to contest chapter four of the law, which relates to crimes committed during the course of demonstrations, though SRP lawmaker Son Chhay said that his party would not support any of the other five chapters.

The SRP registered particular concern during debate on Tuesday over the demonstration law’s stipulation that protesters must wait for approval from the Ministry of Interior before holding a public gathering.

Nuth Sa An, a secretary of state at the Ministry of Interior who served as the government representative to defend the draft law, rejected these criticisms, however, saying that government officials needed to hold talks with demonstration leaders before allowing their protests to go ahead.

“We cannot allow people to inform the government and then immediately go and demonstrate,” Nuth Sa An said. “If any problems occur at the demonstration, who is responsible for this? It is the government.”

SRP President Sam Rainsy urged the government to consider broader reforms to reduce the number of demonstrations that take place in Cambodia, rather than simply seeking to restrict the demonstrations themselves.

Noting the many demonstrations that have taken place in front of Prime Minister Hun Sen’s Takhmao residence, Sam Rainsy said that if he were premier, he would be embarrassed by this frequent occurrence.

“If I were prime minister, I would not feel proud of people coming to me like this. What does it mean? It means that our officials are inactive, that all government institutions below the prime minister are inaccessible,” he said.

Lawmakers have now passed 27 of the 30 total articles in the Law on Nonviolent Demonstrations, with the final three articles expected to be passed tomorrow.