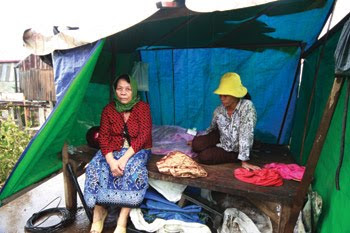 Hourn Kunthea, 60, takes cover in a makeshift shelter with her remaining possessions at Chroy Changvar on Monday.

RESIDENTS who were evicted from their homes in Phnom Penh’s Russey Keo district last week staged a protest in front of Prime Minister Hun Sen’s Takhmao residence on Monday after appealing unsuccessfully to local authorities for an improved compensation offer.

On Thursday, government workers entered the villages of Bei and Duem Kor in Russey Keo’s Chroy Changvar commune and tore down the homes of more than 20 families to make way for a road being built in conjunction with the construction of a new bridge that will connect Chroy Changvar peninsula to central Phnom Penh.

Russey Keo district authorities offered the affected villagers US$500 and 4-metre-by-8-metre plots of land in Meanchey district’s Thnout Chrum village as compensation. But villagers, who are living in tents near the site of their former homes, said the offer was inadequate.

Upon raising this grievance to Chroy Changvar commune officials on Monday, evictees said they were rebuffed, with the officials citing more pressing business relating to voter registration and the upcoming Water Festival.

“They said they will resolve our problem after the Water Festival, but we cannot wait because right now we are homeless,” said 40-year-old Sok Kim Hor, a representative of the evictees.

Pech Saroeun, the chief of Chroy Changvar commune, said there was little he could do to help the evictees.

“We lower-level authorities do not have the power to grant social land concessions,” he said, adding that he had advised the villager to take the government offer.

Following their meeting with commune officials, villagers travelled on to Takhmao, planning to return there again once they have filed a formal complaint regarding their compensation.

“We will file a complaint to Prime Minister Hun Sen to request a decent level of compensation, and we hope he will provide us justice,” Sok Kim Hor said.

“We are waiting for their decision to accept our offer because they were living on public land for a development project,” he said.