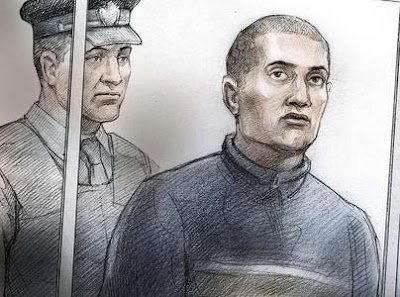 ALEX TAVSHUNSKY FOR THE TORONTO STAR

The man accused of impaired driving in the weekend crash that killed three people shuffled into Old City Hall court Monday with a slight limp.

Roman Luskin, 21, also sported a white bandage around his left hand and bloody scrapes along the right side of his head, visible through his short, buzz-cut hair.

Defence lawyer Michael Simrod had been delayed by another trial, the court was told, postponing the bail hearing until Tuesday. The Crown attorney said she would ask that bail be denied.

At the scene of the crash on Monday morning, scant evidence remained of Saturday night's devastating collision.

But at the northwest corner of Finch Ave. W. and Tobermory Dr., someone had placed two colourful bouquets against the base of a tree.

That was the spot where a 1999 BMW 540 – police described it as "out of control" – sliced a Honda Odyssey minivan in half, killing 44-year-old Hon To, her 24-year-old daughter, Khan (Christine) Taing, and another female passenger.

He has a broken collarbone and chest injuries that make breathing very painful, according to the family.

Another passenger, Hon Tran, 36, was in stable but critical condition and would be undergoing surgery, said a friend of the family that came here from Cambodia 15 years ago.

"They were a lovely family. It's quite emotional.

Pho Taing, with Yun Ho, returned to the crash site Monday and, after looking at a makeshift shrine, collapsed to his knees in grief.

Earlier, Ho said Taing had quit his job as a factory worker to look after his wife, who had been fighting cancer for two years. Their only child was in her last year of nursing studies at the University of Toronto.

The family has not yet made funeral arrangements because they are waiting for relatives to arrive from France and the Netherlands.

Outside Sunnybrook Hospital on Monday, family friend Men Chi said he was feeling "so bad" about the Taings, whom he has known for about five years. Chi, who is Hon Tran's uncle, said his injured niece's parents live in Vietnam but he has yet to tell them about the crash.

"I don't want to worry them so I haven't told them," he said in Mandarin.

Taing, 43, had been driving the women home from prayers at a religious gathering late Saturday night when the crash occurred on Finch Ave. W. at Tobermory Dr.

Moments before the impact, the westbound BMW flew past a police cruiser heading east on Finch, said Sgt. Tim Burrows, adding the officers saw the crash in their rear-view mirror. After hitting the minivan, the BMW travelled another 100 metres or so, police said.

Luskin pleaded guilty in 2007 to five charges related to the placing of an electronic information "skimmer" on an ATM at a Kingston Scotiabank branch, according to a story in the Kingston Whig-Standard.

The Russian immigrant admitted to two counts of possessing card readers adapted to illegally skim banking information from debit cards, possession of stolen debit card data, mischief through interference with bank customers' lawful use of their debit cards, and attempting to defraud Scotiabank customers of money.

In return for the guilty plea, the Crown withdrew four counts of fraud and three counts of theft.

A judge gave Luskin a six-month conditional sentence to be served in the community and placed him on probation for one year.

Also in 2007, charges against him that included failing to provide a breathalyzer sample, possessing tools for the purpose of forgery and fraud, and a court order violation were stayed or withdrawn. The record did not state why.

With files from Denise Balkissoon, Rosie DiManno and Jesse McLean