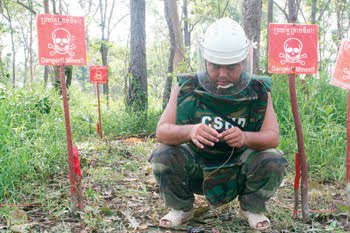 BIOENGINEERED bacteria that glow green in the presence of explosives could someday give Cambodia a safer, cheaper way to detect land mines, Scottish researchers say.

Dr Alistair Elfick, who led the team, explained: “The device uses E coli engineered to produce a sensing molecule and a reporting mechanism. The explosives detector has a … membrane receptor which binds volatile TNT molecules and … produces light.”

The bacteria, which could be modified for use with other explosives, is harmless to people and animals. Environmental impact is minimised, Elfick said, by the fact that cells “die after a few hours, as they are not robust enough to survive in the wild.”

It will be a while before the bacteria are released on Cambodian soil, however – researchers have tested it only “on a very small scale and within the lab”.

“There’s a lot of work to do before it could be used in the field,” Elfick noted.

Were the team’s bio-invention able to make the leap from workshop to wilderness, its presence would be welcome in Cambodia, where massive aerial bombing by the US and decades of civil war littered the country with land mines and unexploded ordnance (UXO), particularly along its eastern and western borders.

Roath Kanith, director of the training and R&D department at the Cambodia Mine Action Centre (CMAC), said that the metal detector, still the technological backbone of the country’s demining efforts, performed with suboptimal speed and efficiency. “This is old technology; it picks up any metal,” Roath Kanith said. “Based on a recent CMAC analysis, out of 513 detections, only one will uncover an anti-personnel mine. We waste a lot of time on false alarms.”

Teams of 25 traditional deminers – using brush cutters, metal detectors and dogs, and protected only by masks, helmets and blast vests — can clear up to 2,000 square metres of mined area per day. According to Cambodia’s deadline-extension request to the Anti-Personnel Mine Ban Treaty (APMBT), 516 square kilometres of mines and UXO were cleared between 1992 and 2009. There are still 648.8 square kilometres to be cleared.

Excellent blog here! Also your site loads up fast!
What web host are you using? Can I get your affiliate link to your host?
I wish my web site loaded up as quickly as yours lol

Check out my webpage ... xn--kxadbjpsnyt5a.com