Evictees could face hunger as aid falls off 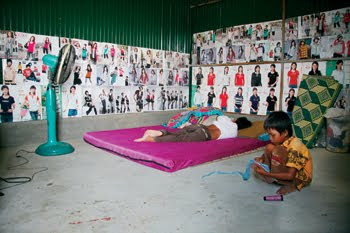 A man lies on a mat in his makeshift home in Tuol Sambo earlier this year.

THE United Nations and other organisations expressed renewed concern about access to food for the 40 HIV-affected families living at a relocation site in Dangkor district, and some said they fear standard food packages will be cut off after a three-month commitment from the World Food Programme concludes in January.

“In the current absence of secure livelihoods and therefore of income flows, access to more than the minimum food package (rice, salt, oil) is crucial,” reads a UNAIDS summary of a November 9 visit to Tuol Sambo, a copy of which was obtained Thursday.

The WFP began distributing standard food packages containing 30 kilograms of rice, 1 litre of vegetable oil and 1.5 kilograms of iodised salt on October 20. To supplement that, the NGO Caritas Cambodia is scheduled to begin its own three-month programme of food packages including sugar, fish, fish sauce and instant noodles on December 1.

But the president of an NGO involved in food distribution at the site said Thursday he was worried that only “10 or 15” families would be in a position to receive food after the three-month WFP commitment ends, adding that he hopes the WFP will commit to another year of food packages.

“I am worried that the WFP will not continue its help, and then we will meet with a big problem because we do not have enough support to help those families with HIV/AIDS,” said Chea Sarith, president of the Women’s Organisation for Modern Economy and Nursing (WOMEN).

His fears were matched by Mey Sovannara, communications and advocacy officer for the HIV/AIDS NGO Khana, which has also been involved in food distribution.

“If the World Food Programme no longer provides support, Khana will not have money to allocate food to them,” Mey Sovannara said, though he added that the NGO might be able to assist “some vulnerable children in Tuol Sambo who face food insecurity”.

Officials at the WFP country office could not be reached Thursday. UNAIDS Country Director Tony Lisle said discussions were ongoing about extending the WFP commitment, and he expressed confidence that families unable to support themselves would continue to receive food.

“I categorically guarantee that we will make sure that there’s no discontinuity in food,” he said.

Residents and rights workers, meanwhile, said access to food was a chief concern.

“The most difficult problem we are facing is the lack of food,” said 41-year-old Tuol Sambo resident Soun Davy. “It was better for my family before we moved to live in Tuol Sambo, because I had a job there and could earn money to buy rice.”

The HIV-affected families were relocated to Tuol Sambo over the summer in a move that was roundly condemned by rights groups.

Am Sam Ath, technical superviser for the rights group Licadho, said many of the families he had interviewed were short on food, adding that their new location some 17 kilometres outside the capital afforded them fewer scavenging options.

“It’s not the same for them now like in the city, when they could collect rubbish and take the money to buy food,” he said.

The UNAIDS site report highlights some progress at Tuol Sambo, noting in particular that residents have “satisfactory access” to health services and antiretroviral therapy, and that “access to water was not considered an issue”. The report also refers to “commendable” efforts by Caritas to involve 39 families in “income-generation opportunities”, mainly in construction, sewing and tailoring.

Though the report states that subsidised electricy was shut off on November 6, residents said Thursday that it had been restored.

Plans are also in the works to upgrade the housing stock and to further integrate the HIV-affected families with families living in a nearby riverside community.

In addition, Lisle said Thursday that Tia Phalla, deputy director of the National AIDS Authority, had told Prasada Rao, Asia and Pacific regional director for UNAIDS, in a meeting this week that the eviction of Borei Keila families to Tuol Sambo had been “a mistake, and that this would not be the way they would proceed in the future”.