Thailand and Cambodia are not enemies : Panitan 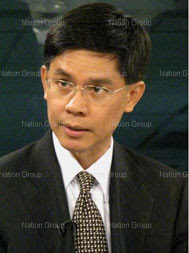 Thailand should re-establish diplomatic ties with Cambodia for the country's interest, it was agreed at yesterday's seminar on bilateral ties.

"The relationships in other aspects, including trade and investment, remain unchanged. At present, Thailand is Cambodia's seventh largest trading partner," he said.

He was speaking at a panel discussion on "Stop, pull in or open a battle: Thai-Cambodian ties amidst the Thai political conflict", which was organised at Chulalongkorn University.

Panitan, formerly a lecturer at the university, said the current conflict required cooperation from the two countries in order to solve it in a diplomatic way.

Former deputy prime minister Chaturon Chaisang said during the panel discussion that the new round of conflict was caused by "a severe wave of nationalism" in both countries.

"All the parties involved should find out a common solution in order to protect the country's interest," he said.

Chaturon, an ally of fugitive ex-premier Thaksin Shinawatra, said the government's decision to cancel a bilateral agreement on maritime overlapping area with Cambodia would cause Thailand to lose rather than gain. He said it was a wrong strategy to freeze Thailand's aid to Cambodia.

Surachai Sirikrai, a political science lecturer at Thammasat University, agreed that Thailand should retain good ties with Cambodia at a time when East Asian is consolidating economically.

"But the problem is that Cambodian Prime Minister Hun Sen has interfered with Thailand's politics, which is against the rules of Asean," he said.

The academic said it appeared Hun Sen appointed Thaksin as his government's economic adviser intentionally to coincide with Cambodia's renewed border conflict with Thailand involving the listing of the Preah Vihear temple ruins as a Unesco World Heritage site.

General Waipoj Srinuan, former deputy permanent secretary of the Defence Ministry, told the seminar that Thailand should prevent the conflict with Cambodia from expanding and try to normalise the relationships with the neighbouring country.

The retired general said that Cambodia, which has long been viewed as undeveloped, appeared to be trying to win acceptance from the world community.

He asked Thailand not to use developed countries' bullying tactic with Cambodia but instead should treat the neighbouring country with respect. "To bully them will cause the conflict to expand," he said.