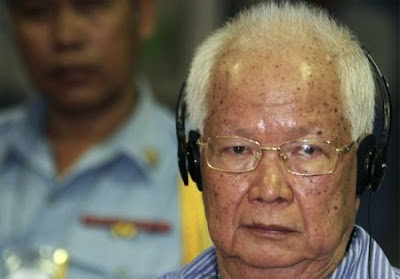 The trial of Khmer Rouge prison commander Comrade Duch underscores the difficulties of such an endeavor in a country with a reputation for corruption and a compromised judiciary.

Reporting from Phnom Penh, Cambodia - The scene at the untidy conclusion of Cambodia's first war crimes trial was telling: a French defense lawyer with his face buried in his hands.

The tribunal promised a more inclusive approach than its counterparts at the International Criminal Court at The Hague. Instead, the trial closed in disarray late last month after an eleventh-hour disagreement between the Cambodian and foreign defense counsels, offering a stark reminder of the difficulties in carrying out international standards of justice in a country with a reputation for corruption and a deeply compromised legal system.

Kang Kek Ieu, referred to as Kaing Guek Eav in tribunal filings, but better known by his revolutionary alias, Comrade Duch, ran the infamous prison where 15,000 supposed enemies of the revolution were tortured before being executed in the nearby "killing fields."

Despite his seeming enthusiasm for the job at the notorious S-21 prison, Duch argued that he and his family would have been killed had he not carried out his superiors' orders.

For nine months, French lawyer Francois Roux crafted a defense strategy of admission and apology that implied the team would seek a lenient sentence. But in the trial's final moments, Duch and his Cambodian lawyer, Kar Savuth, broke with this posture, disputing the legitimacy of the court and calling for Duch's immediate release.

Roux's head-in-hands reaction underlined the rifts in this complex tribunal, a tenuous coalition of domestic and international judges, lawyers and administrators.