Wishing to become an American 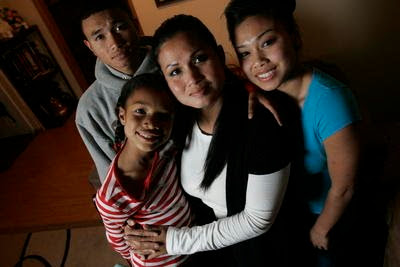 Portrait of Chantan In, middle, with her three children, Brian, 16, left rear; Nancy,18, right; and Azzantee, 8, in their San Jose home November 24, 2009. The single mother originally came to the U.S. with her family from Cambodia as a refugee, sponsored by a Christian church. Though she is a legal permanent resident she's not eligible for the federal loan and grant programs that she needs in order to afford to go back to school. But the fees associated with the citizenship process are out of reach for her. There are hundreds of thousands of legal permanent residents in Santa Clara County who are in limbo like Chantan. Her wish is to get assistance with the hundreds of dollars in citizenship application fees and other add-ons. Starting a local fund to help local people like Chantan would be a start. (Pauline Lubens/San Jose Mercury News) ( Pauline Lubens)

Chantan In was delivered into genocide, her mother giving birth inside one of dictator Pol Pot's political "re-education" prisons amid a communist system that wiped out more than 1 million lives in Cambodia during the 1970s.

Somehow, In and her family survived the camps and the killing, arriving in Oklahoma as church-sponsored refugees a decade later, and ultimately moving to California's Central Valley. Now 34, the San Jose single mother of three dreams of taking one last step to distance herself from that terrifying past — by becoming a U.S. citizen.

In is a legal permanent resident, but says, "I feel that something is missing." That "something," she says, is the feeling of belonging and security that would come with officially becoming an American.

"I just want to complete what I feel. I'm here; I'm a resident; everything is legal. People tell me, you've got all this paperwork, why are you so much in a rush (to become a citizen)? But me having my kids born here and being citizens and everything, I feel that if I'm a citizen, I feel that I'm in place, and I feel that maybe I could express myself a little bit more about being here and not be so afraid of doing things."

Among the things she hopes to accomplish as a citizen: Get her GED and go on to college.

The $675 citizenship application fee is really the only obstacle, says the cosmetology student, who over the years has worked in fast-food restaurants, as a receptionist, as a data-entry clerk and as an accounting assistant.

It's a common story in Santa Clara County, says Laura Diaz, the family support program manager at Sacred Heart Community Service. The San Jose agency hopes Wish Book donors will help establish a local fund that would help pay the naturalization fees for immigrants such as In.

U.S. Census data says that in 2008, there were more than 150,000 immigrants in Santa Clara County who are likely to be eligible for citizenship because they have been living in the U.S. legally for at least five years, but who haven't become citizens yet. About 60,000 Santa Clara County residents are immigrants who entered the U.S. before 1990, but who have not yet become citizens.

The government greatly increased the naturalization fees two years ago, to a total of $675 for a naturalization application and to take and record applicants' fingerprints. Couple that with the recession's impact on paychecks, and Diaz says many people have been forced to forgo the citizenship process as a result.

"The fees have not gone down, but everything else has gone up. You know, people are losing their jobs. (Becoming a citizen) is a priority in theory, but then when you get down to your actual day-to-day living, well, you have kids at home and you need diapers, and it's, 'I think I can wait to become a citizen until next year.' "

Sacred Heart says contributions from Wish Book readers would be earmarked exclusively for citizenship fees for qualifying applicants, and each donation of $50 will build the fund. Sacred Heart also would like to be able to help build personal relationships between donors and beneficiaries — a kind of sponsorship program for aspiring citizens.

In lives with her three children in a yellow stucco house nestled in a cul-de-sac in San Jose. Brian, 16, a hip-hop dancer, towers over his mom as well has his two sisters, Nancy, a diminutive 18-year-old, and 8-year-old Azzantee. Hanging on the walls of the home are crafts that hint at In's Cambodian roots.

In never finished high school. But she dreams of someday getting a four-year university degree, once she gets her GED.

But her lack of citizenship could hold her back there as well. Because federal student loans require many recipients to be a citizen, high citizenship fees are another potential roadblock for immigrants like In. And even though her English is good, she believes she has a long way to go.

"At 34 years old, I feel like time is running out," In says of her desire to further her education. "It's a challenge to me now, because I have trouble reading and writing and speaking."