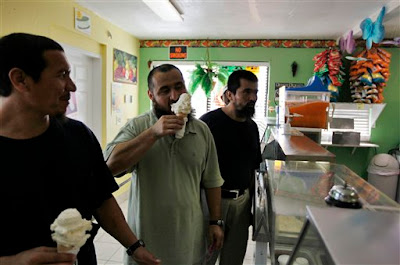 FILE - Former Guantanamo detainees, left to right, Khelil Mamut, Ablakim Turahun, and Salahidin Abdulahat eat ice cream at a shop near Hamilton, on the island of Bermuda, in this June 14, 2009 file photo. The three are among four Chinese ethnic Uighurs who have been released from U.S. military custody after years in Guantanamo, and are being resettled in Bermuda. (AP Photo/Brennan Linsley, File)

BEIJING — China on Tuesday warned the United Nations refugee program not to be a "haven for criminals" as it signaled it wanted the return of 22 Muslim Uighurs who fled to Cambodia after deadly ethnic rioting this summer.

The Uighurs were smuggled out of China with the help of a secret network of missionaries and Chinese Christians, according to missionaries who helped them. They arrived in Cambodia in recent weeks and have applied for asylum at the U.N. refugee agency office in Phnom Penh. An exiled Uighur activist said the 22 included two children.

"These people are involved in crimes," Foreign Ministry spokeswoman Jiang Yu told a press conference, without giving any evidence.

The U.N. refugee program "should not be a haven for criminals," Jiang said.

A UNHCR spokeswoman said there are sometimes disputes with governments "over the kind of people in need of protection."

Overseas Uighur groups say Uighurs have been rounded up in mass detentions since the violence. China has handed down at least 17 death sentences over the rioting.

The 22 Uighurs are the first large group to leave China after the riots, said Ilshat Hassan, a U.S.-based director of the World Uyghur Congress.

He said Tuesday that two children are among them.

"Babies, criminals! This is ridiculous!" he said.

The Uighurs fear they will be returned by Cambodia, which has close ties with China, Hassan said. China's state-run media have reported that China was the top investor in Cambodia in 2008.

Cambodian Foreign Ministry spokesman Koy Kuong said the Chinese Embassy sent the ministry a note about the Uighurs last week, but he said he didn't know what was in it. The Cambodian government and the U.N. High Commissioner for Refugees will conduct a new round of interviews to see if the Uighurs qualify for refugee status, he said.

Earlier this month, Cambodian government spokesman Khieu Kanharith said the country has the right to deny a deportation request if the people involved are political asylum seekers, but "if they are purely criminal people and there is a request, we may deport them."

Some countries such as the United States have refused to send Uighurs — such as ones released from U.S. detention at Guantanamo Bay in Cuba — back to China over concerns about retribution and abuse.

Kitty McKinsey, a UNHCR spokeswoman at the agency's regional office in Bangkok, said Tuesday that it does not discuss individual cases. She described its mission as "to protect any people in the world who cannot receive protection from their own government."

"Sometimes the UNHCR and the government have a dispute over the kind of people in need of protection," she said.