via CAAI News Media
High schools in Cambodia have begun rolling out the first textbook dealing with the genocidal Khmer Rouge regime. It's part of an effort to teach a dark past long left out of the classroom.
Aubrey Belford | Kampong Trach, Cambodia 19 April 2010 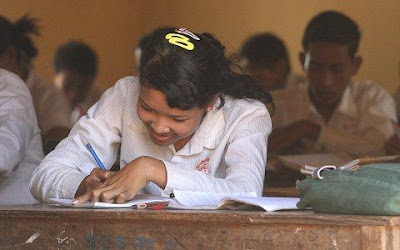 Photo: VOA photo - A. Belford
A girl sits in a history class at the local high school in Kampong Trach, Cambodia


Between 1975 and 1979, as many as two million Cambodians were murdered, starved, or worked to death as the ultra-communist Khmer Rouge tried to build a rural utopia. Many older Cambodians are haunted by vivid memories of this time.
But for the young who make up most of the population, learning this history has been hard to do - schools have up to now just not taught it.
A high school in the southern town of Kampong Trach is at the front of efforts to teach - for the first time - the history of the Khmer Rouge. The school is using a new textbook called "A History of Democratic Kampuchea (1975-1979)".
History teacher Bin Cheat says his students only know a little about the Khmer Rouge from their parents, many of whom suffered under the regime.
Bin Cheat says students have been enthusiastic about the new classes.
As a boy, he was stuffed in a sack and nearly beaten to death by Khmer Rouge soldiers simply for letting air out of a car tire. He says it is important students learn about the Khmer Rouge era - and stories like his own - before it is all forgotten.
The new textbook book was put together by the Documentation Center of Cambodia, a non-profit group tasked with recording the years of mass killing under the Khmer Rouge. 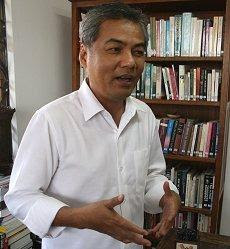 VOA - A. Belford
Youk Chhang, the director of the Documentation Center of Cambodia


The center's director, Youk Chhang, says older history books simply ignored the Khmer Rouge era, with the exception of a brief mention in one book.
"They learned from '45 through '75 and they jumped to 1990, they jumped that period," he said. "After a long public debate they had a photograph of Pol Pot and exactly two lines in Khmer saying that Pol Pot is responsible for the death of 3.3 million Cambodian people. That's it."
Youk Chhang says it took 13 years from the new book's conception in 1996 to get it into schools. Distribution began late last year and the plan is to have one million books in schools and 3,200 teachers trained to use it by the end of this year.
He says getting the book approved was hindered by the fact that most former Khmer Rouge went unpunished and are now found at all levels of Cambodian society and politics.
"In the classroom I can assure you that at least 30 percent are the children of former Khmer Rouge, another 70 percent are the children of the victims," he said. "Among these three thousand teachers I can assure you almost 25 to 30 percent are former Khmer Rouge themselves. This is a broken society, it is a fragile society, so I think you have to live for the future, commit for the future, teach for the future."
At the school, 17-year-old Ny Pagnavuth says he never knew much about the Khmer Rouge. He says he was shocked to learn that when the Khmer Rouge took power, they emptied out the capital Phnom Penh at gun point and sent millions of people, including the old and sick, to toil in the countryside.
The story of that forced march has long been taught around the world as a brutal prelude to the Khmer Rouge's terror. Now, Cambodian students can finally learn the full story of their country.
Posted by CAAI News Media at 11:32 am