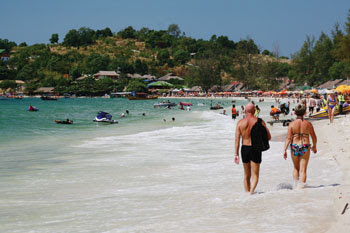 Photo by: Tracey Shelton
Tourists walk along Occheuteal beach in Sihanoukville.
via CAAI News Media
Monday, 19 April 2010 15:00 Phak Seangly
Province saw 50 percent more international visitors for New Year
THE number of international tourists visiting Preah Sihanouk province rose by 50 percent this Khmer New Year, compared to last, echoing the increasing amounts of domestic visitors drawn to the coastal area.
Som Chenda, director of Preah Sihanouk’s Tourism Department, said Sunday that as many as 68,193 local and international tourists visited the province from April 14 to 16 this year.
This marks an increase of 5.2 percent on the 64,800 visitors recorded in the same period of 2009.
“Among the tourists, there were 615 international visitors, while there were only 410 foreign visitors in 2009,” he added, and the majority of vacationers came from Europe or Vietnam.
The 50 percent rise in international travellers has been welcomed by the province’s tourist department.
Som Chenda said that the main reasons behind Sihanoukville’s rising popularity were: the authority’s reinforcement of public order, the town’s increasing attractiveness due to the renovation of town buildings and decorations, and increasing quality of service.
The falling cost of accommodation could also have had an influence.
Som Chenda said that the authority had worked hard to set hotel and guesthouse prices at around twice the normal seasonal rate at Khmer New Year, compared to the tripling of average prices seen last year.
“The authority has followed the Ministry of Tourism’s principles in promoting and raising people’s awareness about our good city, resorts and services,” added Som Chenda
Rising visitor numbers at Khmer New Year were also seen at the nation’s other tourist hub of Siem Reap, according province governor Sou Phirin, who declined to give more details.
The encouraging statistics are indicative of a wider trend seen in the tourism sector in the first few months of 2010.
The industry seems to be entering a period of recovery after experiencing the full fallout of the global financial crisis on international spending.
Kong Sophearak, director of the Statistics and Tourism Information Department at the Ministry of Tourism, told the Post Sunday that that in the first two months of this year, international tourist numbers increased by more than 9 percent, compared to January and February 2009.
Most of the visitors, he said, came from Vietnam.
Last year, tourism revenue fell 2 percent to US$1.561 billion, despite a 1.7 percent rise in visitor numbers, according to the Tourist Ministry.
Posted by CAAI News Media at 12:05 am