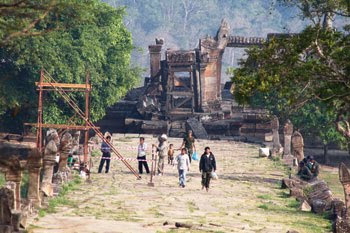 Photo by: Heng Chivoan
Amid tourists and troops, restoration projects proceed at the Preah Vihear temple complex in February. The government has appointed a new council to oversee the site’s development.
via CAAI News Media
Tuesday, 20 April 2010 15:01 Cheang Sokha
THE government has created a council to oversee the development of Preah Vihear temple into a tourism destination, according to the most recent Royal Work Book, which was published earlier this month.
The new council will oversee the existing Preah Vihear National Authority. According to a copy of a February sub-decree signed by Prime Minister Hun Sen, the chairman and councillors were selected with an eye towards the goal of promoting the authority’s work in developing and protecting the temple.
Hang Sot, director of the authority and a member of the newly appointed body, said the council was expected to give advice to the authority on what needs to be done to turn the temple complex into an appealing tourism destination.
Officials have planned restoration work for the temple complex, as well as infrastructure upgrades catering to tourists, he said.
However, although the authority has completed some work designed to improve the temple and attract more tourists, some projects have not proceeded because of the ongoing dispute between Cambodia and Thailand over ownership of areas around the temple, Hang Sot said.
“If there was no dispute at the border near the temple, I think the development would be faster,” he said.
“But I see that many people from across the country are now interested and coming to visit the temple.”
Troops from Cambodia and Thailand have exchanged gunfire several times along the disputed border area near the temple since Preah Vihear was listed as a UNESCO World Heritage site in July 2008.
Even so, Hang Sot said, more than 8,000 tourists visited the temple over Khmer New Year.
Posted by CAAI News Media at 9:52 pm