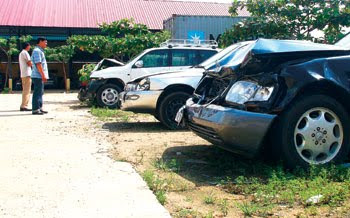 Photo by: Heng Chivoan
Vehicle wrecks sit behind Phnom Penh Municipal Police headquarters in July as they are held until drivers and insurance companies complete paperwork and payments.
via CAAI News Media
Wednesday, 07 April 2010 15:01 Nguon Sovan
Insurers say business is surging again after last year’s decline
INSURANCE premium revenue for the entire industry grew 19 percent in the first two months of this year and is forecast to grow around 20 percent for all of 2010, the Kingdom’s insurance association reported Tuesday.
Chhay Rattanak, chairman of the General Insurance Association of Cambodia (GIAC), told the Post on Tuesday that, according to figures provided by all of the country’s insurance firms, the industry’s premium revenues grew to US$3.8 million in January and February, up more than $600,000 from the same period last year.
Premium revenues grew 11 percent for insurance on automobiles, 10 percent for fire and 16 percent for personal accident, Chhay Rattanak said. Revenues dropped 22 percent for maritime insurance and 48 percent for worker compensation.
“We saw good recovery in almost all businesses,” he said. “And there have not been any dramatic changes in claims trends in the first two months.”
Chhay Rattanak estimated that for the first quarter, the market would grow up to 20 percent, with 20 percent growth to continue throughout the year.
Larger insurers said Tuesday they had seen double-digit climbs in quarterly premium revenue.
“We have increased by 20 percent in premium revenues so far,” said David W Carter, CEO of Infinity General Insurance Plc, declining to disclose premium levels. “This is in line with our budget forecast, and we expect to achieve this trend for the rest of the year.”
Growth came from current clients purchasing more coverage as well as new clients, he said. More revenue came from construction premiums, as a number of projects got underway.
“We are seeing an overall improvement in business conditions and a greater acceptance in the market of Infinity as a strong and reputable insurer,” he said. “This would take us to second position in the market, out of a field of six players, by the end of 2010.”
Forte Insurance (Cambodia) Plc, the Kingdom’s largest insurer in terms of premium revenues, saw growth of around 20 percent the first quarter.
“The growth came from all businesses – food processing, hotels, construction, autos – except garments,” Forte’s general manager, Youk Chamroeunrith, said. “Premium revenues from the garment sector slightly dropped, as not many new factories came in and some existing ones scaled down or closed.”
Cambodian National Insurance Company (CAMINCO) reported growth in premium revenues of 40 percent in the first quarter, to $551,000.
Main premium revenue increases came from insurance for vehicles and home and garment industry fire, CAMINCO Managing Director Duong Vibol said, adding that claims increased as well.
“There were a lot of claims in [the first quarter], especially accidents of passenger buses,” he said.
Cambodia has six insurance companies, with one reinsurer supporting the market.
Total premium revenues for 2009 were $20.07 million, a 2.86 percent drop from 2008.
Posted by CAAI News Media at 12:20 am