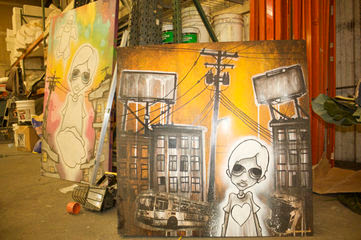 via CAAI News Media
by Jonathan Mendick
Published on April 7, 2010
When Shane Grammer's old church acquaintance Clayton Butler asked him to paint a mural in Phnom Penh, Cambodia, he didn't think twice. Grammer, a 38-year-old artist currently residing in Roseville, completed similar murals in Peru, Mexico and Brazil, sometimes teaming with urban kids on the pieces.
"I'm ecstatic; I love that," Grammer said. "I've offered stuff like that before, and people are just busy or don't do it. So when I'm asked to do it, I'm like, 'Yeah, I'm there tomorrow. Where do I sign up?' "
On April 12, he will be leading a team of six to Cambodia to help Agape International Missions, where Butler works, to help end child sexual slavery and help restore hope to its victims. The team's goal is to "bring hope and joy" through art to the young girls in Phnom Penh's red light district, Svay Pak. They will paint a mural on a new building planned to be a new community center for the girls.
Grammer discovered his passion for art as a young teenager after he was assigned a project in driver education. He had a choice of writing a 10-page paper or creating a model. After choosing to do the model, he found that he enjoyed the two-week-long project so much, he would spend hours every day perfecting his assignment.
Watching the 1983 documentary "Style Wars" on graffiti and hip-hop culture sealed the deal and introduced Grammer to urban art. He's made a living as an artist for the last 15 years and currently runs a company, SG Studios, that makes themed environments for theme parks, casinos, and even churches. On the side, he creates fine art, and painted a graffiti mural at the B Street Skate Park.
When he told his sister-in-law, artist Becky Watson, about the opportunity to paint a mural in Cambodia, she replied to him, "I'm coming with you. You need to find a way, because I have to go."
Watson said she'd done art with youth before in Africa and Nicaragua, but this would be her first time creating a mural with kids. She also invited friends from different fields - a writer, a videographer, a photographer and a musician.
She wants the group to help the girls - some recovering victims of sexual abuse, some still working in brothels - "to tap into their creative process. I think if we can unwind them and give (them) a paintbrush in hand (to) experience it, they will remember it."
But while the two are "like a literal brother and sister," said Watson, they have different ways of mentally preparing for their trip.
"I've broken down and cried once," Grammer said. "That was last Saturday night at a church. They gave me about five minutes to speak and tell them about what I was doing, and they ended up giving me about $2,000."
Since then, Grammer, a self-proclaimed "emotional guy," said he's been so busy with work and family, he's been able to file away his emotions.
Watson, on the other hand, is planning the group's itinerary.
"I think about it every day, and I think about the kids we're going to see, so I keep my mind on it and I'm focusing on it 100 percent of the time," she said. "I just don't want to forget something I want to impart on the kids."
The group, called "Heart for the Kids," will hold a final fundraiser for the trip Thursday night at the Roseville Tower Theatre, 421 Vernon St. The 7 p.m. event will feature art, music and a live auction. Admission is a $10 donation at the door. All proceeds from the event will cover the group's expenses for the trip, with the remaining money raised being donated to Agape International Missions, a Rocklin-based nonprofit. See the above flier for more details.
Posted by CAAI News Media at 10:59 pm