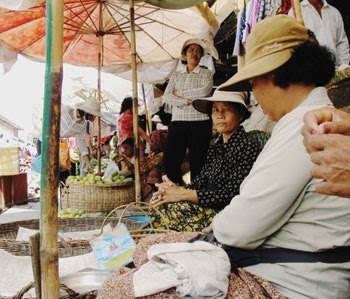 Photo by: Rann Reuy
Market vendors at Psar Leu sit under umbrellas at their stalls on Tuesday after protesting against new restrictions, including one that bans the use of umbrellas before 11am.
via CAAI News Media
Siem Reap Province
VENDORS near Psar Leu protested outside the office of the market owner on Tuesday, claiming that restrictions intended to facilitate traffic in the area – including one that prohibits them from opening umbrellas until 11am – are harming their business.
Y Mao, a 41-year-old vendor who participated in the protest, said the restrictions had been in place since late February, when more than 100 vendors stationed in front of the market were relocated, a move officials said was necessary because the vendors were impinging on a nearby road.
She said she believed authorities were looking to force remaining vendors out as well. “They want to evict us, but we have refused to go, so they have forbidden us from opening umbrellas,” she said.
Other vendors said the owner, who could not be reached on Tuesday, had deployed extra security guards to ensure that they were complying with the regulations.
Oeun Pov, deputy governor of Siem Reap town, said he was unaware of the restrictions, but that officials were working to “improve order” ahead of planned road upgrades. “We will pave the street,” he said, and added that spaces for vendors would be clearly demarcated following the upgrades.
Posted by CAAI News Media at 12:24 am