Rice production on the rise 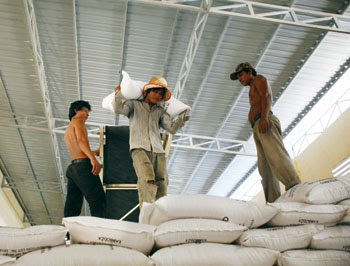 Photo by: Uy Nousereimony
Workers pile rice for storage at a Phnom Penh rice processing plant on March 22. Cambodian rice dealers are hoping to continue boosting surplus stocks in a bid to raise exports.
via CAAI News Media
Wednesday, 07 April 2010 15:01 Chun Sophal
Nation produced 7.58m tonnes last year, 5.7pc more than 2008-09, govt reports
CAMBODIA produced 7.58 million tonnes of paddy during the 2009-10 farm year, an increase of 5.7 percent over last year, according to formal statistics released Tuesday by the Ministry of Agriculture, Forestry and Fisheries.
The Kingdom grew 2.33 million hectares of rice, yielding 6 million tonnes of paddy in the wet season, and 380,000 hectares for 1.58 million tonnes of paddy in the dry season, according to the figures.
The Ministry of Agriculture said Cambodia could have 3.5 million tonnes of paddy left over for export, a 10.75 percent rise on the 3.16 million tonnes left over last year.
Prime Minister Hun Sen said at the closing of an annual agriculture conference Tuesday that the year’s success in paddy output helped ensure food security and lessen the impact of the global economic crisis.
“We will continue to promote productivity of the agricultural sector to reach its top potential to enlarge ... economic growth,” Hun Sen said.
Cambodia plans to raise yields to as much as 3 tonnes per hectare by 2012 to increase exports of processed rice to international markets.
The Ministry of Agriculture said Tuesday that Cambodia could have as much as 2.24 million tonnes of rice for export, after farmers brought in 2.83 tonnes of paddy per hectare this year.
Meas Sopheavy, head of the statistics office at the ministry, said Cambodia will be able to raise paddy production in coming years by making farmers modify growing techniques and use pure seeds.
“Under these measures, we hope Cambodian farmers will be able to harvest higher paddy yields in the coming years and will be able to meet the demands of both local use and export,” Meas Sopheavy said.
In the farming year 2008-09, Cambodia grew 2.61 hectares of rice, an average paddy yield of only 2.74 tonnes per hectare.
Yang Saing Koma, president of the Cambodian Centre for Study and Development in Agriculture, said farmers can increase both paddy production and sale price.
“When paddy price is increasing like this, we hope that farmers will take this opportunity to produce more rice, if in the future the government can get enough expansion of irrigation systems for them,” he said.
The Supreme National Economic Council said last month that Cambodia could produce as much as 15 million tonnes of rice paddy, leaving 8 million tonnes for export.
Economic analysts say the Kingdom’s farmers can improve their livelihoods if the country can further penetrate the competitive international marketplace.
However, rice millers and other industry insiders say the quality of processed rice remains low, keeping Cambodia out of a market that has proved lucrative for neighbouring Vietnam and Thailand.
Posted by CAAI News Media at 12:16 am

37 kits (round that up to 9 total quart and a
half kits). The estimate you receive will be based on the number
of skips you need, what size skip you want, and how long you plan to
keep it. And when we would cut for the plumbing work, I had to patch
around that and make it solid.

You'll also opt in purchasing a survey scanner if you should happen to feel that you need better probabilities in finding the ore that you would like to mine. Jundee brought up US$400 million of gold property alone, while Bronzewing, at this time owned by Navigator Strategies Ltd. Once the timeframe reaches 0 to X minutes, the star is about to land.

The bus smells weird and the bus appears clean but I am sure it is Very
Disgusting. Shopping by internet is a comfortable way than to go markets and turn around.
Their personal magnetism and charisma will be a source.

If you are like me and love garlic, you are already
too late. 5 will decrease the availability of lead from
your soil. This will give them time to acclimate to their new environment,
avoiding stress and shock often associated with transplanting,
ensuring a healthy start.

This is the only way to ensure good products in hand and great value for your hard earned
money. I suffered a lot of bullying and some sexual abuse and it compounded my identity problem.
Information regarding different websites that contain large chunk of databases of unclaimed properties and money are also provided
in different newspapers. Thus, by putting the price, you get targeted customers who
are very interested in what you are offering; in other
words, you get hot leads. This is why various newspapers are now helping to find unclaimed property owners by listing their names.


Feel free to surf to my weblog :: click here

Whether you are searching for specialty styling products or specific Loreal hair products, you are sure to find what you need.
Since these goods are made from plant extracts, seed oils and hair only twice
in a week. The product should be one that is made for your type of hair,
whether it be dry, oily, curly or straight.

37 kits (round that up to 9 total quart and a half kits).
Blistering heat and bitter freezing cold can crack the toughest of concrete.

This Wednesday night there is a lot going on in Atlanta.

Still the health concerns mar the overall positive sides of this economic growth
as people take their health problems as the cost of development which is indeed
pretty higher. For the thick and curly hair, it is best to use the Moroccan Oil.
Almost from the time of our grandparents and other ancestors, the advantages of using olive oil are known to all.

However, this solution is chemical free and some people find
natural products more appealing. Indeed, nourishing and conditioning the scalp using aromatherapy oils is one of the most basic
and simplest ways to prevent further hair loss and stimulate healthier
hair regrowth.

Step Three Coat your hair Comb your hair into small
sections. Identify your own hair trouble and go for a product which mainly addresses your
needs. Once you have determined what kind of texture your hair has,
you can then start using one of the techniques described below to improve it.

Khas (Vetiveria Ziziniodis):- used as an effective hair restorer.
As a hair growth stimulant, you can add 10
drops of rosemary oil, 10 drops of sandalwood
oil and 10 drops of lavender oil to 50ml of carrier oil and massage it into your scalp.


Review my blog post: how to make hair grow faster

With all due joys, this should be the period of utmost carefulness and conscious
concentration on the vital issues affecting the
future the nation and due attention of not being stabbed from the back.
The benefits of having high thread count sheets is that mills are forced to create much finer threads in order to
increase the amount of threads in a square inch (keeping in mind that
they don't also increase the ply). Now, many Indian advertising agencies begin to pay more attention to Indian Hindi news and this can be led to the increase in revenue generation. Do you have any of your own experiences to share with readers from all over the Christian community. Finer threads usually result in a much smoother and softer fabric.

Here is my page egyptian newspapers