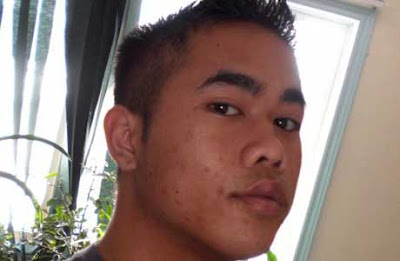 Photographs from Facebook of Robert Mark Toek, who was found dead on Seacliff Beach Friday, Aug. 27, 2010.
Photograph by: Facebook, The Windsor Star 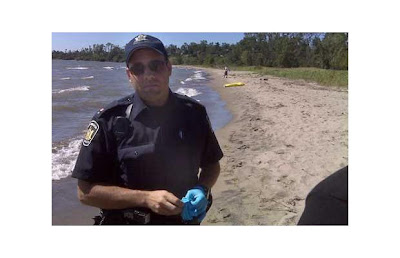 Leamington Police Const. Ian Stibbard at Seacliff Beach, where a body was discovered Friday afternoon.
Photograph by: Nick Brancaccio, The Windsor Star
http://www.windsorstar.com/
via khmer NZ
By Jeff Bolichowski, The Windsor Star
August 30, 2010
LEAMINGTON -- Foul play has not been ruled out in the mysterious death of a 20-year-old Leamington man whose body was discovered on Seacliff Beach.
Police have identified the man as Mark Toek, found by two people from out of town as they walked along the beach on Friday.
Ontario Provincial Police were called in to help investigate and they were seeking help from the public. An autopsy was conducted on the weekend in London, though no results were expected to be released until later today.
A friend, 16-year-old Kraig Bigley, told The Star that he last saw Toek Thursday night when he’d invited a small group of friends to the beach for a drink at a going-away party.
Toek, he said, was talking about going to Toronto.
He said that sometime during the gathering, a stranger approached the group and began picking a fight with Toek.
Eventually the stranger left, Bigley said, then Toek went into the water and told him to leave him alone.
Bigley said Toek had nearly lost his life once before, when an accident half a world away saw paramedics revive him from death.
“He passed away but they brought him back with the chest paddles.”
Bigley said Toek had been riding his motorcycle on a dark night in Cambodia when a car struck him.
Jenny Toek, niece of Mark Toek, said he had been visiting Cambodia, where their family was originally from, for the first time.
“I was actually his niece but he called me his sister,” she said. The two lived in the same household for most of 14-year-old Jenny Toek’s life.
“We did everything together,” she said, adding that they spent a lot of time together in Leamington but also travelled to areas where their extended family lives, including Toronto.
She said her uncle, who was born in St. Thomas, was known to most of his friends as Toek or by his middle name, Robert.
The last time she saw him was Monday and she said she doesn't know how he died.
Bigley said Toek was a straight-talker who could make people laugh even when they were down.
“He was actually happy,” he said. “He lived life like every day was his last. He didn’t care what anyone else would even think of him.”
Beyond music and dance, Bigley said, cars were his friend’s passion. He said Toek loved to travel and had recently been to Toronto.
“He had a thing for speedbikes,” Bigley said, though he hadn’t ridden since the accident in Cambodia. “He said he has bad memories and everything.”
His first meeting with Toek, said Bigley, was a chance encounter at Wilkinson Park.
“One morning I was walking through it, and he just told me to go sit down beside him,” he said.
They talked for at least an hour and their friendship blossomed from there.
Police are asking anyone with information about either the case or Toek to call them at 519-326-6111 or 1-888-310-1122 or to call Crime Stoppers at 1-800-222-8477.
With files from Carys Mills
Posted by CAAI News Media at 8:24 am

Here is my web-site: accident claims