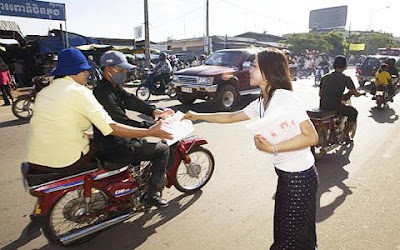 Photo: AP
An activist for the Cambodian Women's Party, hands an election leaflet to a motorcycle taxi rider in Phnom Penh.
The sentencing appeared to be the result of “pressure from politicans or government officials.”
Four men including a human rights worker received lengthy jail sentences in Takeo province Monday, after they were found guilty of distributing leaflets allegedly insulting the former king and the government.
Leang Sokchoeun, a 28-year-old staff member of Licadho, fainted after hearing his guilty verdict and two-year prison sentence. He was taken to the provincial hospital in an ambulance.
Two other men, Thack Vannak, 34, a Vietnamese interpreter; and Thach Le, a 61-year-old motorcycle taxi driver, both received two-year sentences. A fourth man, a monk named Thach Kong Phuong, 34, who remains at large, was sentenced to three years in absentia.
All four are accused of distributing leaflets in Takeo province critical of the January holiday celebrating the ouster of the Khmer Rouge from Phnom Penh by Vietnamese forces. The January Seven holiday is politically devisive, with some hailing it as a day of liberation and others as a herald of a decade of occupation.
The court said police had provided evidence and witness testimony placing the men at the site of a leaflet distribution.
However, Am Sam Ath, a senior investigator for Licadho, said the decision was unfair and the evidence unclear. The sentencing appeared to be the result of “pressure from politicans or government officials,” he said.
Posted by CAAI News Media at 8:09 am