Hands up for children 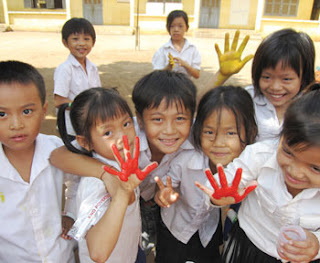 Photo Courtesy of Save the Children Australia
via CAAI
Monday, 20 September 2010 15:00 Post Staff
Children in Kampong Cham province’s O’Rang Oav district show off their paint-stained hands on Saturday during an event held by Save the Children Australia. As part of the event, which came two days before a global Millennium Development Goal summit was set to kick off in New York, more than 180 children made handprints on clothes and participated in marches to draw attention to the issue of child mortality.
Posted by CAAI News Media at 10:19 pm