$US14 million lost from strikes 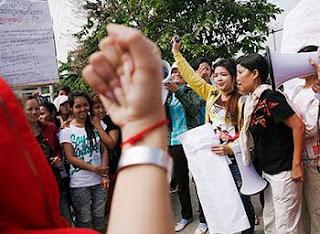 Photo by: Uy Nousereimony
Garment workers rally together during a work stoppage at the Grantex factory last week.
via CAAI
Monday, 20 September 2010 00:17 Nguon Sovan
GARMENT worker strikes cost the industry US$14 million last week due to production halts and shipment delays, but lasting damage may have been done to the sector’s reputation, according to the Garment Manufacturers Association in Cambodia.
Losses resulted from the suspension of production, discounts granted to buyers due to delays, expedited shipments by air, as well as damage by strikers, Garment Manufacturers Association in Cambodia (GMAC) secretary general Ken Loo said yesterday.
Estimating the industry lost $14 million during the strike, he said it had also sent the wrong messages to potential investors and buyers.
“There are future consequences from the strike – it may spoil the reputation of garment manufacturing in Cambodia and buyers may stop orders,” he warned.
Employees from an estimated 30 factories walked off the job from Monday to Thursday in an effort to boost the minimum wage up to $93 a month, according to Ken Loo.
At least 10 factories have filed lawsuits against the striking union to ask for compensation for damages, as well as court recommendations for the workers return to work, and to suspend several of the strike masterminds, he said.
Strike leader Ath Thun, president of the Coalition of Cambodian Apparel Workers Democratic Union, said he had heard about the lawsuits launched by factories, but had not received official court notices.
“Our strike was in compliance with Cambodian law,” he said. “We informed relevant authorities more than two months before the strike – we did nothing wrong. ...read the full story in tomorrow’s Phnom Penh Post or see the updated story in online from 3PM UTC/GMT +7 hours. (New York 4AM, Los Angeles 1AM, Chicago 3AM, Paris 10AM, Toronto 4AM, Sydney 6PM, Bejing 4PM, Tokyo 5PM, London 9AM, Johannesburg 10AM, Riyadh 11AM, Mumbai 1:30 PM)
Posted by CAAI News Media at 7:22 am