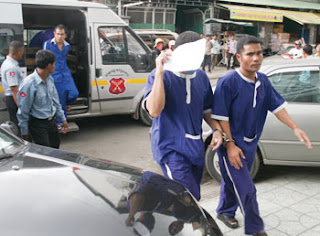 Photo by: Uy Nousereimony
Defrocked monk Neth Kai, 35 (wearing a mask and holding up paper), is led into Phnom Penh Municipal Court on Friday.
via CAAI
Monday, 20 September 2010 15:01 Chrann Chamroeun
A DEFROCKED monk who police say has confessed to filming hundreds of women as they bathed naked at a pagoda in Daun Penh district has been convicted in the first case stemming from the scandal, with judges sentencing him to one year in prison.
Neth Kai, 35, a monk at Srah Chak pagoda, was arrested on June 26 and remanded in custody after being accused of using a mobile phone to secretly record the videos, which were widely distributed.
Four women have filed complaints against him.
Friday’s verdict from Phnom Penh Municipal Court in one of those cases also requires the monk to pay compensation totalling US$9,456 to the victim, as well as a fine of $472.
Both the fine and the one-year term were the maximum allowed under the law.
Chea Hay, Neth Kai’s lawyer, said he believed the verdict was “unacceptable”, and that he would ask the Appeal Court to “slash down” the sentence because of the fact that his client confessed.
Nou Navy, a lawyer for the victim, also expressed disappointment with the sentence, saying that the one-year term “does not repair her reputation and the shame she has felt in society because her naked video has already been sent around via Bluetooth”.
Posted by CAAI News Media at 9:59 pm