Coastal flights back on agenda 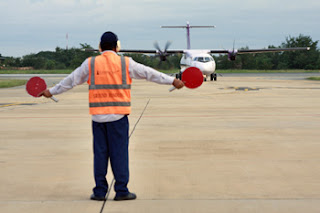 Photo by: Heng Chivoan
A Cambodia Angkor Air plane taxis at Phnom Penh International airport. The carrier has yet to commit to flights to Preah Sihanouk Airport.
via CAAI
Tuesday, 26 October 2010 21:00 Ellie Dyer and May Kunmakara
Developers and real estate agents have again emphasised the need for regular flights to Sihanoukville airport, with one party calling it “possibly the single most critical issue affecting tourism” in Cambodia.
As Société Concessionnaire Des Aéroports prepares to announce its high-season schedule on Wednesday morning, the issue of Sihanoukville airport has again come under the spotlight.
Currently staffed by around 40 workers, some of whom SCA officials have said are employed to maintain equipment, the airport still has no regular flights running to it after operations were resumed in 2007.
The lack of traffic comes despite an extension of the runway, which now stands at 2,500 metres according to SCA’s website, and the concessionaire’s 2009 brochure billing it as “the airport likely to become the busiest platform in years ahead”.
Developers and real estate agents with interests in the coastal town urged the need for government action – pointing to the involvement of national carrier Cambodia Angkor Air – in an email seen on Tuesday.
Chairman of the Song Saa island resort development, Rory Hunter, said: “The main point I’d like to convey is that this is not a ‘chicken or the egg’ scenario. Without flights, investors will not put up the sort of money required to build hotels as it’s simply too risky.
“The government needs to take a leadership role and commit to regular flights. No flights means no investment and therefore no tourism industry on the coast.”
Representatives from the Kingdom’s real estate industry echoed calls to begin flights to the town as soon as possible.
Daniel Parkes, country manager of property firm CB Richard Ellis,Said: “Flights to Sihanoukville Airport are possibly the single most critical issue affecting tourism development in Cambodia. CAA can plug that gap, and should, but also we need to attract other airline connections.”
SCA has confirmed it is actively seeking connections, and remains hopeful that flights may begin next year.
The concessionaire’s communication and marketing manager Khek Norinda said during a recent visit to Phnom Penh International Airport that the firm was promoting the coastal resort as a destination, and added that it had recently conducted a trip with Japanese tour operators in a bid to promote the town.
“The big issue is that few people know Sihanoukville. At the same time, we have talks with airlines, and we have to try to have incentive packages for them to fly there,” he said.
He remained confident that a rebounding economy could play to the airport’s advantage.
“A year and half ago it was very difficult: They all were in the crisis, so of course they were not going to start a new route. But, right now, we think this is the right moment.
“There are more and more people interested.
We hope that next year there will be [flights] operated, maybe on a charter basis,” he said.
Despite mounting pressure, the carrier generally regarded as the most likely candidate to run Sihanoukville flights – CAA – has yet to commit to any flights.
Tham The Huang, general manager of Vietnam Airlines in Cambodia, believed to own at least a 49 percent stake in CAA, confirmed that the airline would not extend operations to Preah Sihanouk Airport, as demand was low.
“We don’t have any plans to fly there yet because base on the market is not enough,” he said.
Malaysia Airlines’ Cambodia area manager Abdul Karim said yesterday that his firm also did not plan to start Sihanoukville services due to “limited demand”.
“Personally I feel the lack of promotion of the destination makes the product less known to foreign tourists,” he said.
“Once the product is well marketed and made known like other beach destination in this region, such as Bali and Phuket ... it will attract airlines to have direct services.”
Market conditions are also of concern at the Ministry of Tourism. Director of statistics at the ministry Kong Sophearak said yesterday that they were a barrier for flights.
“We are urging and encouraging any private airlines – not only the national carrier – to fly domestic flights there first, but, I think the market is the big issue for them,” he said.
Yet, commentators such as Hunter say that although CAA may not make a fast profit, the long-term country benefits make it worth the risk for the state – which is understood to own 51 percent of the carrier.
“A loss leader approach will pay off significantly in the long run and the flow-on effects to the broader economy would be substantial,” he said.
Others say unity is key in ensuring flights begin.
“It is the responsibility of all of us as stakeholders in Cambodia’s future; the government, the hotel industry, our organisation and also you the media [to help],” wrote Parkes.
Mai Xuan Long, an official at CAA, declined to comment.
Posted by CAAI News Media at 10:26 pm