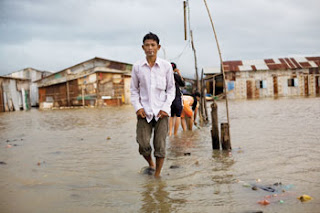 Photo by: Will Baxter
A man walks through floodwaters earlier this month in Daun Penh district’s Srah Chak commune.
via CAAI
Wednesday, 27 October 2010 15:02 Buth Reaksmey Kongkea
A SCHOOLGIRL in Oddar Meanchey province has been confirmed dead, officials said yesterday, as floodwaters continued to rise in Banteay Meanchey province and more than 17,000 people nationwide were said to face shortages of food.
Keo Vy, director of the National Committee for Disaster Management, said yesterday that the girl was swept away by floods on October 15.
“She was on her way home from school in the morning, when the floods came and swept her away into deeper waters,” he said.
The confirmation of the girl’s death brought the official toll from recent flooding to six: two in Oddar Meanchey, one each in Siem Reap, Preah Sihanouk and Kampong Chhnang provinces, and one in Phnom Penh.
The unofficial death toll now stands at nine, with three other deaths reported by police: one more each in Kampong Chhnang and Phnom Penh, and one in Kandal province.
“So far we don’t have specific numbers of people who have been affected by the floods,” he said. “We think that although there are less people affected by the floods than Typhoon Ketsana last year, it has really affected Cambodia’s economy and national infrastructure. We are still updating our report before it is finalised.”
He said initial estimates indicated that 17,468 families faced food shortages across the country, 86 houses had collapsed and more than 30,000 had been flooded.
NCDM Vice President Nhim Vanda said last week that “preliminary estimations” indicated that “rains and floods may cost almost half of the costs of last year’s Typhoon Ketsana disaster in Cambodia”, in which 43 people were killed and US$132 million worth of damage was caused.
In Banteay Meanchey, provincial cabinet director Om Chantha said yesterday that water levels in flooded areas had increased by roughly 10 centimetres due to heavy rainfall overnight in Sisophon and Mongkul Borei districts, where more than 900 families had been forced to move from their homes to the sides of roads and to local pagodas.
“We are very worried about these people.... Some of them are now faced with diseases and lack of food,” he said. “I would like to appeal to all humanitarians and NGOs to bring food, medical care and other supplies for them.”
Sam Chankea, provincial coordinator for the rights group Adhoc, said floods at the provincial prison had receded only slightly, and that many of the 850 prisoners housed there were still sleeping on tables to avoid water.
Nov Saroeun, chief of the drainage and pumping unit at the Phnom Penh Municipal Public Works and Transport Department, said the recent floods, which began on October 10, had provided a good test for the capital’s drainage system.
“I think the floods have provided us with a lesson learned and good experience in preparing and preventing floods in our cities,” he said. “We will start to improve our drains and pumping systems in the near future.”
He said flooding in Phnom Penh was exacerbated by litter clogging up drains, and that Dangkor district – where 1,021 families fled their homes last week but have since returned – was hit especially hard because “there were no more drains or pumping systems constructed in these areas”.
“We will start to improve our drains and pumping systems in the near future,” he added.
Posted by CAAI News Media at 11:04 pm