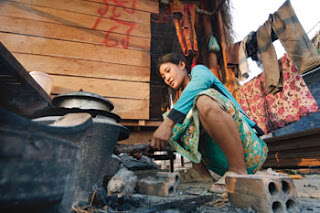 Photo by: Heng Chivoan
A woman cooks outside her home in Preah Vihear province’s Choam Ksan district in February. Her home is one of hundreds that have been marked for removal.
via CAAI
Wednesday, 27 October 2010 15:01 Rann Reuy
MORE than 250 families in Preah Vihear province’s Choam Ksan district yesterday rebuffed entreaties from officials to relocate to make way for UNESCO and Preah Vihear National Authority offices.
A notice from the authority dated October 18 said 70 families from Kantuot commune’s Svay Chrum village would need to move by Saturday, with the remaining families expected to clear out not long after.
The families have been offered 2 million riels (US$475) in compensation as well as 50-by-100-metre plots of land in Thamacheat Samdech Techo Village (Samdech Techo Nature Village). The same village has taken in hundreds of other families that have been moved to make way for development at Preah Vihear temple, which was enshrined as a UNESCO World Heritage site in 2008.
Residents said yesterday that they had been living on their land since 2000, and that they had previously been promised by local officials that they would never be evicted.
“Samdech Techo village has no market. It is far, it has a dirty road, and the land is small,” said 45-year-old Sao Yat.
Another resident, 43-year-old Keo Nith, said she did not want to part with her 5 hectares of rice fields, which she described as productive.
“They might control this area,” she said of the PVNA and UNESCO officials, “but we are asking to live here.”
Provincial officials yesterday visited the site and attempted to negotiate with the residents, who responded by saying they would not move.
Long Sovann, the deputy provincial governor, said the decision to kick them out had come from higher than the provincial level.
“This is the national principle. It is not the provincial decision,” he said.
He then referred further questions to PVNA General Director Hang Soth, who could not be reached for comment yesterday.
Posted by CAAI News Media at 10:56 pm