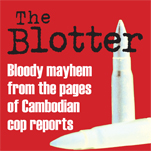 
Wednesday, 27 October 2010 15:00 Phak Seangly
Police arrest thieves at post-robbery singalong
Six men have been arrested on suspicion of robbing a taxi driver at gunpoint before heading to a house to sing karaoke in Takeo province on Sunday. Police said the victim’s taxi had broken down when the gang of six hoodlums fired several shots into the air. They then stole roughly US$15 from the driver before heading to the house to belt out some tunes. However, police apprehended them before they could sing a single note, and all six confessed to the robbery.
KOH SANTEPHEAP
Beer-loving teens steal pump from governor
Battambang provincial police have arrested three teens on suspicion of stealing a water drainage pump from the Sampov Loun district governor. Police said a total of four suspects sold the machine for 500 Thai baht (US$16), and police arrested three of them after the sale was completed. They confessed, but claimed they had no choice because they needed money for beer. In addition, they noted that this was the second robbery they had committed. Police are on the hunt for the remaining suspect.
KOH SANTEPHEAP
Former monk hangs himself in old pagoda
A former monk who suffered from a mental illness hanged himself at his old pagoda in Phnom Penh’s Sen Sok district on Monday. Police said the 34-year-old man, who had left the monkhood a month earlier, was found hanging with a copper wire from a water drum inside the pagoda. The pagoda’s chief monk said the man left the monkhood to “have his mental illness cured”. Police concluded the death was suicide.
RASMEY KAMPUCHEA
Sloshed singers smash motorbikes into truck
Three men died instantly when two drunken motorbike drivers crashed into a lorry after a karaoke session in Pursat province’s Bakan district on Saturday. Witnesses reported that the drunken drivers had just finished up at a local karaoke spot when they hopped on their bikes and began driving “like the wind”. They then crashed into a truck coming in the opposite direction, killing themselves and the truck driver instantly.
RASMEY KAMPUCHEA
Man accused of raping 13-year-old sweetheart
Police in Battambang town on Saturday detained a 20-year-old man accused of raping his 13-year-old sweetheart the night before. According to police, the man and the girl went to a local nightclub for an evening of dancing when he invited her back to his house. They reportedly had sex twice, and he was arrested the following morning. The girl’s parents sued the suspect, demanding $4,000, but the suspect claimed that they “loved one another”.
KAMPUCHEA THMEY
Posted by CAAI News Media at 10:48 pm