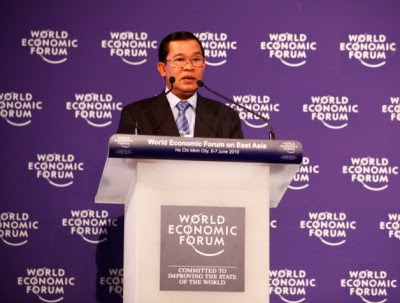 Image credit:World Economic Forum
via CAAI
November 4, 2010
It’s been quite a couple of weeks on the South-east Asia diplomatic circuit. Julia Gillard toured the region for the first time as Australian prime minister, US Secretary of State Hilary Clinton popped in for the odd summit, and old wounds festered—and in some cases were re-opened.
This was certainly true in Phnom Penh. Cambodian Prime Minister Hun Sen has never been a great friend of the United Nations, particularly given the decades of international recognition the world body once afforded his old nemesis Pol Pot and his dreaded Khmer Rouge.
Of course, the UN did make some amends by stepping in and sorting out the country’s first democratic elections back 1993, which provided Hun Sen with the foundations for his future power base. However, even UN support for the current Khmer Rouge tribunal—more a product of the personal patronage of former Secretary General Kofi Annan than any sense of justice within the UN legal system—has failed to elevate the body to any level of respect in his eyes.
The relationship between Hun Sen and the UN has always been a marred by internal politics, with a wily and always combative prime minister ruling an uncompromising roost.
His critics would like to portray him as a third world despot, while outside the country in particular the opposition leader Sam Rainsy is seen as some kind of political saint—a virtuous lone voice of reason in a political wasteland.
Neither is true.
The critics fail to understand that Hun Sen actually loves opposition because it legitimizes his position. At the same time, Rainsy just isn’t very good at opposing, winning less than 22 percent of the vote at national elections two years ago.
And Hun Sen is also addicted to political brawling. That’s one reason why his latest flare-up with the UN over the deportation to Thailand of opposition red shirts in July should be seen in the broader context of Cambodian politics.
Hun Sen told Secretary General Ban Ki-moon, who was recently in Cambodia to look in on the tribunal process, to remove the local head of the UN human rights group in Cambodia, Christophe Peschoux. The prime minister is annoyed with Peschoux, saying he was acting as a spokesman for opposition groups after he criticised Phnom Penh for deporting the two red shirts. If Ban Ki-moon doesn’t do what he’s told, then the UN human rights office will have to go, according to Hun Sen.
Of course in reality he cares little about Thailand and even less for the UN. But he understands Cambodians deeply and they share long memories.
Cambodian resentment over UN support for the Khmer Rouge, and the atrocious behavior of some UN troops here in the early 1990s, can’t be understated. When people in high places flinch and grimace at the thought of a UN leader being held to ransom by an alleged tin pot dictator they should remember Cambodians generally aren’t like Rainsy but more like Hun Sen—they really don’t care what outsiders think.
Hun Sen bobbed and weaved when Ban Ki-moon paid his visit. He fended off allegations of political interference in the tribunal because he has refused to support prosecutions outside the current remit. He then went on the attack over UN dabbling in Cambodia’s own internal affairs.
The next elections are still three years away. But the prime minister, in need of a boost, is already warming-up.
Posted by CAAI News Media at 11:01 pm